Three Points is a scenic, sparsely populated settlement at the northwestern edge of Los Angeles County in the western Antelope Valley. It is on the northern edge of the Angeles National Forest, on the east side of Oakgrove Canyon where it opens out into Pine Canyon, 17.5 miles (28 km) north of Castaic.

Three Points was homesteaded in 1892 by the Lafferty family, 83-year-old Laura May Lafferty told a reporter in 1991. Her grandmother acted as a midwife, and her father, Ben Cherbbono, was a French Canadian muleskinner who led a team that helped grade the Ridge Route highway in the early part of the 20th Century. Gookins Lake in the area was named after her mother’s family, she said.

In those days, Three Points was graced with a one-room schoolhouse, Pine Canyon School, where in 1953 Mrs. Lillie Knighton taught children aged 6 to 14; in midwinter, a “huge pot-bellied stove . . . hissed with heat.” The school also acted as a community center; movies related to classwork were shown each Thursday night, open to adults.

Apart from the school, a tavern variously called the Three Point Cafe, Maxine’s, and Nancy’s Up the Road Cafe, was another center of social life. Bert Gookins was the first owner and builder — sometime in 1912, or maybe 1924, Bert Hart, Gookins’ grandson, recalled. It was a grocery store once, Hart said, and perhaps the restaurant and bar were added in the 1930s or 1940s. The building was occasionally occupied by a traveling dentist who used a foot-powered drill. 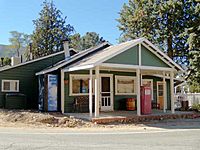 Former cafe was turned into a private residence.

Michael and Anita Felix bought the cafe in 1984 with the idea of using its park-like grounds for special events. Two years later, Anita had a heart attack and so the Felixes began leasing it to other operators. When Maxine Martin had it in 1991 it was a combination bar, restaurant, social club and video-rental store featuring a decor that included

a jukebox, animal traps, rattlesnake skins, guns, old photographs, dollar bills pinned to the wall, a bottle of pickled pig feet and a sign that says “All tabs must be paid by the end of the month.”

In November 1994 the Felixes resumed managing the cafe — but they opened it only on Saturdays and Sundays, and soon thereafter they put it up for sale.

In 2008 it was a private residence: An unusable gasoline pump in front was purely decorative, and the only sign of commerce was an outside vending machine that dispensed bottled water.

Three Points was settled in a wooded valley shrouded in volatile pine trees, near a mountain fittingly named Burnt Peak, and the town has been threatened by fire many times over the decades. The earliest story about Three Points in the Los Angeles Times, the closest metropolitan newspaper to the settlement, is dated August 24, 1927, and, like many such articles thereafter, it was reporting on a massive fire in the forested area.

Twenty-two years later, in 1949, another fire in the canyon made the news:

In July 2004, the Times reported, “two houses burned in Three Points, a place defined by the only business in town, a little red-shingled restaurant named the Three Point Cafe. A third house in the area burned Thursday.”

The Los Angeles County's public library sends its Antelope Valley bookmobile to Three Points from 9:30 to 11:30 a.m. one day a week.

All content from Kiddle encyclopedia articles (including the article images and facts) can be freely used under Attribution-ShareAlike license, unless stated otherwise. Cite this article:
Three Points, California Facts for Kids. Kiddle Encyclopedia.