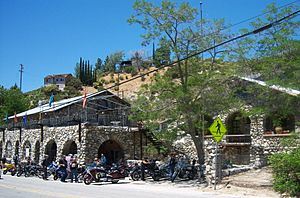 Lake Hughes is an unincorporated community in the foothills of the Sierra Pelona Mountains, northwest of Palmdale and north of the Santa Clarita Valley, in the Angeles National Forest. It is on the sag pond waters of Lake Hughes and Elizabeth Lake. The community is rural in character, with a population of 649 in 2010, but also has a strong recreational element centered on the three lakes in the vicinity. The community of Elizabeth Lake is located just east of Lake Hughes, sharing the same ZIP code.

Nearby Elizabeth Lake, known then as La Laguna de Chico Lopez, was a watering locale on Spanish colonial and Mexican El Camino Viejo in Alta California and the Gold Rush era Stockton – Los Angeles Road. From 1858 to 1861, Lake Hughes was on the route of the Butterfield Overland Mail, between the Widow Smith's Station and Mud Spring stage stops. The lake area was to the west of Rancho La Liebre, an 1846 Mexican land grant now part of Tejon Ranch.

Lake Hughes was named for Judge Griffith (Patrick) Hughes, who homesteaded the area around the turn of the 20th century. Settlers were drawn to the area because water was more plentiful than in the drier Antelope Valley.

In 1907 William Mulholland, superintendent of the Los Angeles Department of Water and Power, started work on the Elizabeth Lake Tunnel for transporting water in the Los Angeles Aqueduct from Owens Valley to Los Angeles. Less than a half a mile east of Lake Hughes, the five-mile-long (8 km) tunnel is 285 feet (87 m) under the valley floor. The tunnel was driven from both ends. The north portal is at Fairmont Reservoir and the south in Bear Canyon (now Portal Canyon) just off of Green Valley. This 11-foot-wide (3.4 m) tunnel was driven 27,000 ft (8.2 km) through solid rock and met in the center within 1½ inches (3.8 cm) in line and ⅝ inches (1.6 cm) in depth. Work was around the clock and averaged about 11 feet (3.4 m) per day. The Elizabeth Lake Tunnel was the largest single construction project on the Los Angeles Aqueduct and set speed records in its day.

C.A. Austin promoted Lake Hughes as a summer resort in 1924, as a "fine mountain resort on the edge of Antelope Valley."

According to the 2010 United States Census, Lake Hughes had a median household income of $53,281, with 29.0% of the population living below the federal poverty line.

All content from Kiddle encyclopedia articles (including the article images and facts) can be freely used under Attribution-ShareAlike license, unless stated otherwise. Cite this article:
Lake Hughes, California Facts for Kids. Kiddle Encyclopedia.