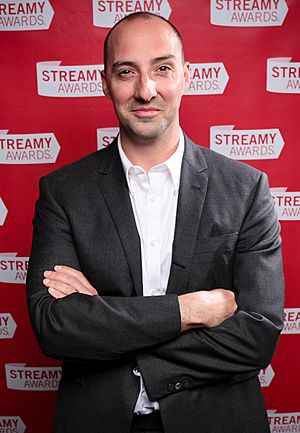 Hale at the 2010 Streamy Awards

Anthony Russell "Tony" Hale (born September 30, 1970) is an American actor and comedian. He was born in West Point, New York. Hale is known for his role in the FOX comedy series Arrested Development as the neurotic Buster Bluth. Since 2012, he has played Gary Walsh on the HBO comedy Veep, for which he won the 2013 and 2015 Primetime Emmy Award for Outstanding Supporting Actor in a Comedy Series.

All content from Kiddle encyclopedia articles (including the article images and facts) can be freely used under Attribution-ShareAlike license, unless stated otherwise. Cite this article:
Tony Hale Facts for Kids. Kiddle Encyclopedia.