Trail of the Coeur d'Alenes facts for kids

The Trail of the Coeur d'Alenes is a rail trail in the northwest United States, in northern Idaho. It follows the former Union Pacific Railroad right-of-way from Mullan, a mountain mining town near the Montana border, westward to Plummer, a town on the prairie near the Washington border. Generally following the Coeur d'Alene River, the rail line was abandoned in 1991 and the trail officially opened in March 2004.

The trail's 73-mile (117 km) route winds through the mountainous terrain of historic Silver Valley, into the chain lakes region, along the shore of Lake Coeur d'Alene, over the Chatcolet Bridge to Heyburn State Park, and concludes with a climb to the northern Palouse prairie. Trail users can continue along a bike path in Washington that leads to Spokane. The eastern half of the trail in Shoshone County has Interstate 90 nearby. In Kootenai County, I-90 leaves the river to head over Fourth of July Summit to the lake's north shore and the city of Coeur d'Alene, while the river and trail descends southwest toward Harrison, closer to State Highway 3. 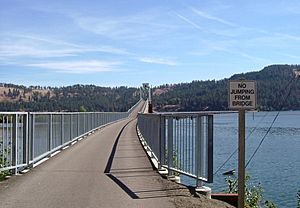 The trail is not only a recreational facility, but also a solution to environmental problems left behind by Idaho's mining industry. Silver, lead, and zinc were discovered in the valley around 1884, and a rail line was built to access the mines around 1888. Much of the rock in the railbed was either waste rock from mines, or tailings containing heavy metals. The railbed was also contaminated with spillage from passing trains.

The Trail of the Coeur d'Alenes includes camping facilities and rest areas regularly. The trail leads through protected marsh lands, offering the cyclist a glimpse of eagle and osprey nests, moose, elk, and a variety of ducks and other wildlife, as well as some rare species of wildflowers and accompanying butterflies as a result of the age-old soot from the old railroad.

All content from Kiddle encyclopedia articles (including the article images and facts) can be freely used under Attribution-ShareAlike license, unless stated otherwise. Cite this article:
Trail of the Coeur d'Alenes Facts for Kids. Kiddle Encyclopedia.