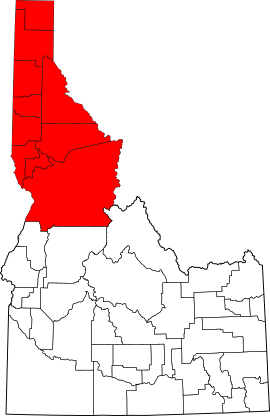 The Idaho Panhandle—locally known as North Idaho—is a salient region of the U.S. state of Idaho encompassing the state's 10 northernmost counties: Benewah, Bonner, Boundary, Clearwater, Idaho, Kootenai, Latah, Lewis, Nez Perce, and Shoshone (though the southern part of the region is sometimes referred to as North Central Idaho). The Panhandle is bordered by the state of Washington to the west, Montana to the east, and the Canadian province of British Columbia to the north. The Idaho panhandle, along with Eastern Washington, comprises the region known as the Inland Northwest, headed by its largest city, Spokane, Washington.

The Idaho Panhandle observes Pacific Time north of the western-flowing Salmon River in the southern part of Idaho County. The rest of the state to the south observes Mountain Time, which begins at Riggins. Though the Idaho Panhandle is at the same longitude as southwestern Idaho, the reasons for the different time zones are: (1) because Spokane is the commercial and transportation center for the region, and (2) there are many cross-border towns and cities that are connected, led by Spokane with Coeur d'Alene and Post Falls, followed by Pullman (home of Washington State University) with Moscow (home of the University of Idaho), and Clarkston with Lewiston.

The Panhandle is isolated from southern Idaho due to distance and the east-west mountain ranges that naturally separate the state. The passage by vehicle was arduous until significant highway improvements were made on U.S. Route 95 in North Central Idaho, specifically at Lapwai Canyon (1960), White Bird Hill (1975), the Lewiston grade (1977), and Lawyer's Canyon (1991).

Although the Coeur d'Alene area has experienced recent growth, southwestern Idaho has grown at a faster pace.

North Idaho has not elected a governor since the re-election of Cecil Andrus (D) in 1974. Andrus, an Oregon native, was a resident of Orofino when first elected in 1970. (Boise was his residence during his later campaigns of 1986 and 1990). The most recent member of the U.S. Congress from the Panhandle is Compton I. White, Jr. (D), last elected in 1964. 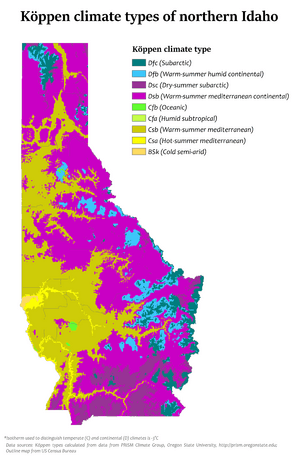 The North Idaho region is most noted for silvaculture, the growing of trees and the production of lumber through the regions 12 lumber mills. The production of grass seeds and hops for beer production are also significant. Nine microbreweries have brewing operations in the area, making North Idaho highly characteristic of the Pacific Northwest. There are also many cattle ranches for raising beef.

All content from Kiddle encyclopedia articles (including the article images and facts) can be freely used under Attribution-ShareAlike license, unless stated otherwise. Cite this article:
Idaho Panhandle Facts for Kids. Kiddle Encyclopedia.