In November 2002, John McCoy, a Tulalip leader, was elected to the Washington State legislature, retired in April 2020. For a time he served as the only Native American in the legislature, joining Jeff Morris, an Alaskan Native (Tsimpshian) who was elected in 1996 with two other Alaskan Natives, Dino Rossi (Tlinget) and Jim Dunn (Aleut). In 2002 the Tulalip Tribes also exerted political power by allying with other tribes across the state and defeating a state Supreme Court candidate "with a long track record of opposing tribal interests."

The term Tulalip comes from Snohomish and means "a bay shaped like a purse." It was used in 1855 to describe the tribes who joined together on the Tulalip Reservation established by treaty with the federal government. They included the Duwamish, Snohomish, Snoqualmie, Skagit, Suiattle, Samish, and Stillaguamish peoples, all of whom are South and Central Coast Salish peoples. 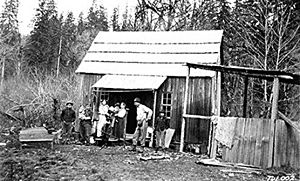 A Tulalip family in front of their home on the reservation in 1916. Gabe Gobin worked as a logger.

The Tulalip Indian Reservation was established by the Treaty of Point Elliot in 1855 and by Executive Order of US President Ulysses S. Grant on 22 January 1873. The reservation is 22,000-acres large and lies on Port Susan in western Snohomish County, adjacent to the western border of the city of Marysville. It has a land area of 35.3 sq mi (91.3 km², or 22,567 acres) and a 2000 census population of 9,246 persons residing within its boundaries. Its largest community is Tulalip Bay.

The Tulalip people settled onto reservation lands after signing the Point Elliott Treaty with the former Washington Territory on January 22, 1855. The reservation now comprises the western half of the Marysville-Tulalip community, which was divided by the 20th-century construction of Interstate 5. Marysville is an incorporated city and lies east of the freeway.

The Marysville School District serves both the city and the reservation. To accommodate a growing population, in 2008 it opened three new schools, built of prefab, modular units that operate and look like traditional construction, at its site on the reservation. This large campus is now called the Marysville Secondary Campus; it contains Heritage High School, Marysville Arts and Technology High School, and a Middle School. The two high schools share a gym and commons center.

The tribes speak English and Lushootseed, a Central Salish language. The language is written in the Latin script. A dictionary and grammar have been published. 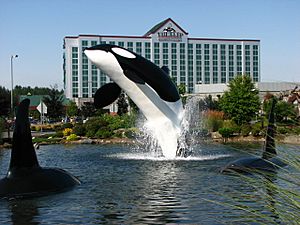 The Tulalip Tribes has begun to act more in local and state politics, at times in alliance with other Native American tribes in the state. In November 2002, John McCoy, a longtime Tulalip leader, was elected to the Washington state legislature, where he first served as the only Native American member.

In addition, in the 2002 election, the Tulalip worked with other tribes in the state to defeat a candidate for the state Supreme Court who had a long record of opposing tribal interests.

Seven other Native Americans have since been elected to the state legislature, including Julie Johnson (Lummi). Only one Native American state representative is Republican; all the others are members of the Democratic Party.

The tribes host numerous annual events, including Treaty Days, typically in January to commemorate the signing of the Point Elliot Treaty on 22 January 1855; First King Salmon Ceremony, to bless the fishermen and celebrate catching the first king salmon of the season; Winter Dancing; and a Veteran's Pow Wow during the first weekend of every June.

All content from Kiddle encyclopedia articles (including the article images and facts) can be freely used under Attribution-ShareAlike license, unless stated otherwise. Cite this article:
Tulalip Facts for Kids. Kiddle Encyclopedia.