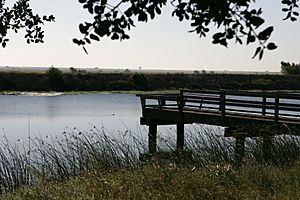 A photo taken on Twitchell Island in 2006. 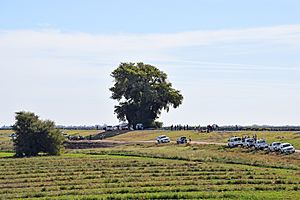 Twitchell Island is an island in the Sacramento-San Joaquin River Delta in Sacramento County, California, 35 kilometres (22 miles) southwest of Sacramento. At 2 metres (6.6 feet) below sea level, the 1,200 ha (3,000-acre) is bounded on the north by Seven Mile Slough, on the east and south by the San Joaquin River, and on the west by Three Mile Slough. The island is entirely within the Rio Vista Gas Field, although well pads and associated infrastructure make up only a small part of its land use. It is managed by Reclamation District 1601.

Twitchell is eighty-five percent owned by the State of California.

Twitchell Island is the site of an experiment being conducted by the U.S. Geological Survey to study whether growing tules and cattails on the sinking islands of the Sacramento Delta can reverse the soil loss caused by wind, rain and farming. The soil under the 15-acre (6.1-hectare) site has risen 1 to 2 feet (0.30–0.61 metres) since the project started in 1996.

The plants not only help rebuild the level of the soil, but sequester quite a bit of carbon as well. It is believed that farmers in the delta might be able to make money with so-called "carbon-capture" farming by planting tules and cattails rather than row crops and get paid by companies who need to meet state greenhouse gas limits.

All content from Kiddle encyclopedia articles (including the article images and facts) can be freely used under Attribution-ShareAlike license, unless stated otherwise. Cite this article:
Twitchell Island Facts for Kids. Kiddle Encyclopedia.