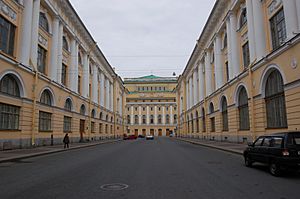 The Vaganova Ballet Academy is a ballet school which was founded in 1738 by Empress Anna Ioannovna (1693-1740) in Saint Petersburg, Russia.

The original name of the academy was the Imperial Ballet School. In the Soviet regime, the school was rebuilt as the Leningrad State Choreographic Institute. After that, in 1957, the name of the school became the Vaganova Ballet Academy by Agrippina Vaganova. Every year, over 3,000 children audition and only approximately 70 children are accepted. It has eight year curriculum, and 30 dancers complete the whole of the curriculum. Dancers who take the eight year course may join ballet companies all over the world.

All content from Kiddle encyclopedia articles (including the article images and facts) can be freely used under Attribution-ShareAlike license, unless stated otherwise. Cite this article:
Vaganova Ballet Academy Facts for Kids. Kiddle Encyclopedia.