Prior to its settlement by Europeans, the indigenous Coast Miwok and Pomo people hunted, fished, and gathered in the area. A Miwok village named Ewapalt has been documented in the Valley Ford area.

Europeans explored the coastline in the early 17th century but did not settle until 1812, when Russian fur traders came south from Alaska and built Fort Ross about 22 mi (40 km) northwest of Valley Ford. The Russians remained until 1841, when the area came under Mexican rule. In 1850, the year California became a U.S. state, the area was made part of Sonoma County. 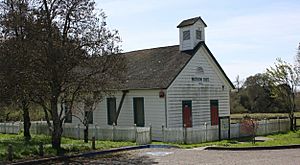 Valley Ford had a grain mill in the mid-19th century. Starting in the 1870s, Valley Ford was a stop on the North Pacific Coast Railroad connecting Cazadero to the Sausalito ferry, enabling local ranchers and fishers to export produce to San Francisco.

In 1976, Christo and Jeanne-Claude's installation art piece Running Fence passed through Valley Ford on its way from Cotati to Bodega Bay.

Open from 1856 to 1967, Watson School once served as Valley Ford's school, and is located in a Sonoma County Regional Parks Department historic park about 3.5 miles north of Valley Ford.

According to the United States Census Bureau, the CDP covers an area of 2.6 square miles (6.8 km²), all of it land.

All content from Kiddle encyclopedia articles (including the article images and facts) can be freely used under Attribution-ShareAlike license, unless stated otherwise. Cite this article:
Valley Ford, California Facts for Kids. Kiddle Encyclopedia.