Bodega Bay is a town and census-designated place (CDP) in Sonoma County, California, United States. The population was 1,077 at the 2010 census. The town, located along State Route 1, is on the eastern side of Bodega Harbor, an inlet of Bodega Bay on the Pacific coast.

Bodega Bay is the site of the first Russian structures built in California, which were built in 1809 by Commerce Counseller Ivan Alexandrovich Kuskov of the Russian-American Company in the lead-up to the establishment of Fort Ross. For the Russians, the settlement in Bodega Bay was called Port Rumyantsev, named after the Russian Foreign Minister Nikolai Petrovich Rumyantsev, and it served as a port to support Fort Ross and the larger Russian community known as Colony Ross.

The location scenes in the Alfred Hitchcock-directed film The Birds (1963) were filmed in Bodega Bay. The town markets itself with the film in many ways, including its Birds-themed visitors' center. The location was also featured in the cult horror movie Puppet Master (1989).

PG+E wanted to build a nuclear power plant on Bodega Head in the 1960s, but the plans were shut down after large protest (the first for environmental reasons) and the fault, which they found while they were digging the hole for the first reactor. The hole filled with water and became known as "The Hole in the Head". 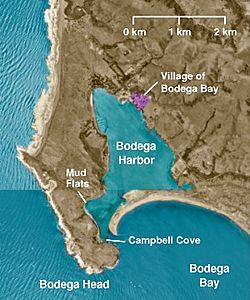 The village of Bodega Bay on Bodega Harbor

According to the United States Census Bureau, the CDP has a total area of 12.5 square miles (32 km2), 8.3 square miles (21 km2) of it is land, and 4.2 square miles (11 km2) of it (33.37%) is water. The town lies on the edge of Bodega Harbor. Bodega Bay itself extends south along the coast to Tomales Bay. North of town lies a long coastal exposure of alternating rock outcrops and sandy beaches which is known as Sonoma Coast State Beach.

The U.S. National Weather Service provides a helpful visual aid graphing weather and climate information from the nearby Monterey sensors to display visually by month the annual typical temperatures, the past year's temperatures, and record temperatures.

This region experiences warm (but not hot) and dry summers, with no average monthly temperatures above 71.6 °F. According to the Köppen Climate Classification system, Bodega Bay has a warm-summer Mediterranean climate, abbreviated "Csb" on climate maps. Like much of the California coast, summer afternoons are often cool and windy (and sometimes foggy) as winds blow in off the ocean.

The Census reported that 99.0% of the population lived in households and 1.0% lived in non-institutionalized group quarters.

A branch of the University of California operates a marine lab at Bodega Bay, the Bodega Marine Laboratory.

A nuclear power plant had been planned for Bodega Bay in the 1960s but was abandoned after both local and statewide protests and the discovery of a fault across the proposed site. Excavation for the site began at Bodega Head, and when the project was abandoned the area has been referred to by locals as "The Hole in the Head."

All content from Kiddle encyclopedia articles (including the article images and facts) can be freely used under Attribution-ShareAlike license, unless stated otherwise. Cite this article:
Bodega Bay, California Facts for Kids. Kiddle Encyclopedia.