Vich is a municipality in Nyon in the canton of Vaud in Switzerland. 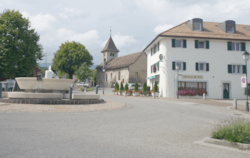 The Plainisphare record label is in Vich.

Vich once had a paleolithic village (which are about 2.5 million years old) on it. There are also clues that it was lived on during the Bronze Age. There is also a Roman paved road running through it from Nyon to Orbe.

Vich was controlled by many people. It belonged to the lords of Besançon to Cossonay, Prangins and Savoy.

In 1536 the canton of Vaud was taken by the Bernese who kept it until 1798 when the canton was freed by the French revolutionary troops. In 1803, Vich joined the Swiss Confederation.

All content from Kiddle encyclopedia articles (including the article images and facts) can be freely used under Attribution-ShareAlike license, unless stated otherwise. Cite this article:
Vich, Switzerland Facts for Kids. Kiddle Encyclopedia.