Mansion on the right, stone barge on the left

The landscape and architecture were influenced by Veneto and Tuscan Italian Renaissance models and designed in the Mediterranean Revival architecture style, with Baroque elements. F. Burrall Hoffman was the architect, Paul Chalfin was the design director, and Diego Suarez was the landscape architect.

Miami-Dade County now owns the Vizcaya property, as the Vizcaya Museum and Gardens, which is open to the public. The location is served by the Vizcaya Station of the Miami Metrorail. 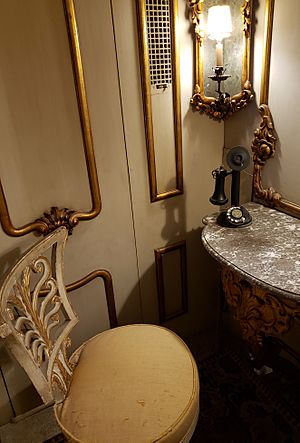 Telephone at Vizcaya Museum and Gardens

The estate property originally consisted of 180 acres (73 ha) of shoreline Mangrove swamps and dense inland native tropical forests. Being a conservationist, Deering sited the development of the estate portion along the shore to conserve the forests. This portion was to include the villa, formal gardens, recreational amenities, expansive lagoon gardens with new islets, potager and grazing fields, and a village services compound. Deering began construction of Vizcaya in 1912 officially beginning occupancy on Christmas Day 1916 when he arrived aboard his yacht Nepenthe. The villa was built primarily between 1914 and 1922, at a cost of $15 million, while the construction of the extensive elaborate Italian Renaissance gardens and the village continued into 1923. During the World War I years building trades and supplies were difficult to acquire in Florida. Vizcaya is noteworthy for adapting historical European aesthetic traditions to South Florida's subtropical ecoregion. For example; it combined imported French and Italian garden layouts and elements implemented in Cuban limestone stonework with Floridian coral architectural trim and planted with sub-tropic compatible and native plants that thrived in the habitat and climate. Palms and Philodendrons had not been represented in the emulated gardens of Tuscany or Île-de-France. 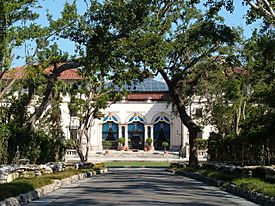 Deering used Vizcaya as his winter residence from 1916 until his death in 1925. Paul Chalfin, a former art curator, painter, and interior designer, was the project's director. He assisted and encouraged Deering to collect art items, antiquities, and architectural elements for the project. Chalfin recommended the architect F. Burrall Hoffman to design the structural and envelope of the villa, garden pavilions, and estate outbuildings. The landscape master plan and individual gardens were designed with the Colombian landscape designer Diego Suarez, who had trained with Sir Harold Acton at the gardens of Villa La Pietra outside Florence, Italy. The estate's name refers to the northern Spanish province Vizcaya (In English Biscay), in the Basque region along the east Atlantic's Bay of Biscay, as 'Vizcaya' is on the west Atlantic's Biscayne Bay. Records indicate Deering wished the name also to commemorate an early Spaniard named Vizcaya who he thought explored the area, although later he was corrected that the explorer's name was Sebastián Vizcaíno. Deering used the Caravel, a type of ship style used during the 'Age of Exploration', as the symbol and emblem of Vizcaya. A representation of the mythical explorer "Bel Vizcaya" welcomes visitors at the entrance to the property.

Vizcaya's villa exterior and garden architecture is a composite of different Italian Renaissance villas and gardens, with French Renaissance parterre features, based on visits and research by Chalfin, Deering, and Hoffman. The villa facade's primary influence is the Villa Rezzonico designed by Baldassarre Longhena at Bassano del Grappa in the Veneto region of northern Italy. It is referred to sometimes as the "Hearst Castle of the East".

James Deering died in September 1925, on board the steamship SS City of Paris en route back to the United States. After his death Vizcaya was inherited by his two nieces, Marion Deering McCormick, wife of Chauncey McCormick, and Barbara Deering Danielson, wife of Richard Ely Danielson. Over the decades, after hurricanes and increasing maintenance costs, they began selling the estate's surrounding land parcels and outer gardens. In 1945 they sold significant portions of the Vizcaya property to the Catholic Diocese of St. Augustine, Florida, to build Miami's Mercy Hospital. 50 acres (200,000 m2) comprising the main house, the formal gardens, and the village were retained. In 1952 Miami-Dade County acquired the villa and formal Italian gardens, needing significant restoration, for $1 million. Deering's heirs donated the villa's furnishings and antiquities to the County-Museum. Vizcaya began operation in 1953 as the Dade County Art Museum. The village and remaining property were acquired by the County during the mid-1950s. In 1994 the Vizcaya estate was designated as a National Historic Landmark. In 1998, in conjunction with Vizcaya's reaccreditation process by the American Alliance of Museums, the Vizcaya Museum and Gardens Trust was formed to be the museum's governing body.

Vizcaya Museum also features gilded era technology.  There are old doorbells, a dumbwaiter and a rotary-dial telephone.  Vizcaya’s telephone system was the first one in Miami-Dade County.

On March 22, 1971, three individuals from New York City stole approximately $1.5 million in artworks and silver items from the Villa Vizcaya, some of which were of historical value. This trio of reputed jewel thieves were arrested on March 25, 1971. Sergeant Tom Connolly from the New York Police Department raided the Manhattan apartment of Vojislav Stanimirović and his wife Branka, and arrested them. The couple's accomplice, Alexander Karalanović, was also arrested, and all three were charged with suspicion of stolen property and possession of a dangerous weapon. From the Stanimirovićs' apartment approximately $250,000 of the stolen goods was recovered. Sergeant Connolly stated that included in the theft was a silver bowl that once belonged to Napoleon Bonaparte and was virtually priceless. According to Sergeant Connolly, the three perpetrators had been under surveillance for four months for unrelated mega jewel burglaries that they had carried out in the Manhattan Diamond District. NYPD Captain Thomas Kissane said that the vast majority of the precious items stolen from the Vizcaya were never recovered.

Mansion on the right, stone barge on the left 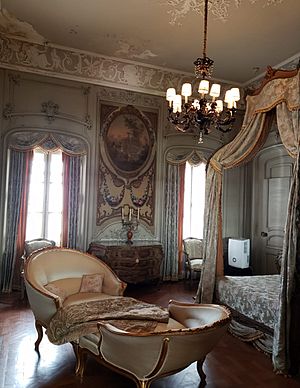 The Estate is now known officially as the Vizcaya Museum and Gardens, which consists of 50 acres (200,000 m2) with the villa and the gardens, and the remaining native forest. The estate is a total of 50 acres (200,000 m2), of which 10 acres (40,000 m2) contain the Italian Renaissance formal gardens, and 40 acres (160,000 m2) are circulation and the native 'hammock' (jungle forest). The villa's museum contains more than seventy rooms of distinctive architectural interiors decorated with numerous antiques, with an emphasis on 15th through early 19th century European decorative art and furnishings. Amongst those furnishings contain ceramics, the originals of which were shipped from England in 1912 but sank along with the Titanic. Luckily Deering took out insurance and had them replaced. Currently owned by Miami-Dade County and governed by the Vizcaya Museum and Gardens Trust (formed in 1998), Vizcaya is located at 3251 South Miami Avenue in Coconut Grove neighborhood of Miami, and is open to the public daily except Tuesdays, Thanksgiving, and Christmas Day. It has accreditation by the American Alliance of Museums. 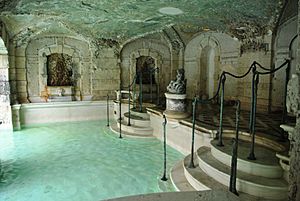 Vizcaya was built with an open-air courtyard and extensive gardens on Biscayne Bay. As such, the estate has been subject to environmental and hurricane damage, the latter notably in 1926, 1992, and 2005. Miami-Dade County has granted money ($50m U.S.) for the restoration and preservation of Vizcaya. These funds have been matched by grants from FEMA, Save America's Treasures, and numerous other funders. Plans include restoration of the villa and gardens, and adaptation of the historic village compound for exhibition and educational facilities; however, additional funds are required for this. The completed first phase of this project has included rebuilding of the museum's Cafe and Shop (in historic recreation areas of the building adjacent to the pool), renovation of the East and West Gate Lodges that flank South Miami Avenue, and rebuilding of the David A. Klein Orchidarium in a plan that generally uses historic precedent. At the same time, Vizcaya has completed the first half of a major conservation program of its outdoor sculpture collections. With a consulting landscape architect, Vizcaya has too finished a comprehensive cultural landscape report, which will be a vital tool in the ongoing restoration of the formal gardens.

The Great hurricane of 1926 devastated the greater Miami area including Vizcaya. Vizcaya’s historic rose garden was destroyed by the Great Hurricane of 1926 after saltwater seeped into the rose garden decimating the roses and preventing growth thereafter.  Vizcaya’s horticultural team partnered with the Tropical Rose Society of Miami to help bring some roses back to Vizcaya’s gardens 100 years later.  However, the historic rose garden, now known as the fountain garden, has not been returned to its former glory. 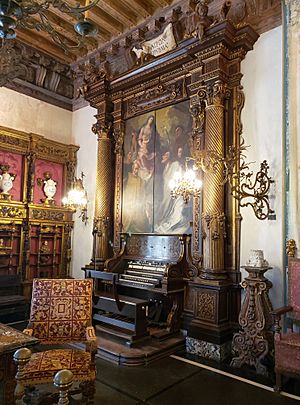 One of Vizcaya’s outdoor restoration project challenges included the estate’s swimming pool grotto built in 1916.  The pool is only one of two public places in the world to feature a mural by Robert Winthrop Chanler, a prominent American artist.  The ceiling mural was designed in 1916 depicting an underwater fantasy scene filled with creatures and marine life.  Shells are embedded into the plaster mural of the scene.  In 1992 and 2005, the swimming grotto was submerged during hurricanes.  The combination of floods and Miami’s climate have led to preservation challenges and are a priority to the museum as it is home to one of only two Chanler murals still in existence today.

The State of Florida and the Division of Emergency Management’s Hurricane Loss Mitigation Program provided Vizcaya with a grant of $194,000 to help prevent future damage to the historic estate. 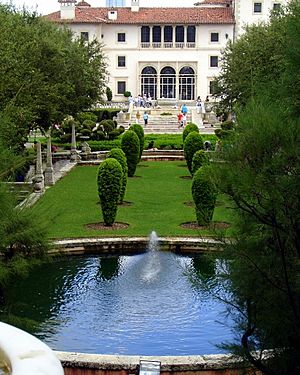 In 2008 the National Trust for Historic Preservation listed Vizcaya as one of America's Eleven Most Endangered Historic Places. As noted by the National Trust's website, Vizcaya's inclusion on this list was based on the threat of proposed highrise development on neighboring property. Specifically, the National Trust stated: "Unless development is blocked or an intervention occurs, this cultural landscape will be permanently damaged by the construction of three high-rise condominium towers within Vizcaya's historic viewshed." The proposed highrises were blocked by two court rulings and in 2010 the City of Miami included viewshed protection for historic properties like Vizcaya in its new zoning code, "Miami 21."

Other types of events are hosted by the museum to collect funds for its preservation. For example, every Halloween, Vizcaya organized a costume party, where people from all around Florida attend with their creative costumes. The cause of the event is to preserve and protect one of the jewels of South Florida.

Vizcaya is a proud partner that participates in Baynanza, Biscayne Bay Cleanup Day every year.  Baynanza is an annual event where the community comes together to clean up Biscayne Bay, the most important ecological system in South Florida. During the event Vizcaya encourages participants to capture Biscayne Bay’s beauty with a photography contest.  The event usually takes place on Earth Day.

Vizcaya was the 1987 venue where President Ronald Reagan received Pope John Paul II on his first visit to Miami.

Vizcaya was the 1994 location of the important 'First Summit of the Americas' convened by President Bill Clinton. This began a series of Summits of the countries in The Americas. The thirty-four nations' leaders that met at Vizcaya created the 'Free Trade Area of the Americas (FTAA),' that all the hemisphere's countries, except Cuba, could join for national and corporate trade benefits.

All content from Kiddle encyclopedia articles (including the article images and facts) can be freely used under Attribution-ShareAlike license, unless stated otherwise. Cite this article:
Vizcaya Museum and Gardens Facts for Kids. Kiddle Encyclopedia.