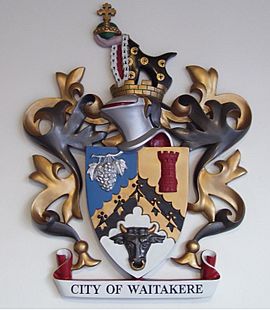 The coat of arms of the City of Waitakere

Waitakere City is a former territorial authority district in the west of Auckland, New Zealand, which was governed by the Waitakere City Council from 1989 to 2010. It was New Zealand's fifth largest city, with an annual growth of about 2%. In 2010 the council was amalgamated with other regional authorities into one new Auckland Council.

Before being settled by Europeans, the Māori iwi Te Kawerau a Maki and Ngāti Whātua had already settled in the Waitakere area. In the 1830s, European settlers started to arrive, concentrating on timber milling, kauri gum digging and flax milling, with brickworks and pottery industries following later.

In the 20th century, industry and service trades started to grow, with population taking off after World War II, partly due to improved transport links with Auckland City, such as the Northwestern Motorway, whose first section opened in 1952. Suburbs like New Lynn, Glen Eden and Henderson grew to prominence in the following decades.

In February 1993 the council developed the "Greenprint" as an Agenda 21 initiative and declared itself to be an eco-city.

Waitakere City was formed by the amalgamation of Waitemata City with the boroughs of Henderson, New Lynn, and Glen Eden in the 1989 nationwide re-organisation of local government. There were just two mayors of Waitakere during its existence, Assid Corban (previously mayor of Henderson Borough) from 1989 to 1992, and Bob Harvey from 1992 to 2010.

On 1 November 2010, the Waitakere City Council was abolished and Waitakere City was merged into a single Auckland city governed by Auckland Council. All council facilities and services were handed over to the new council.

The elected Council consisted of the mayor and 14 councillors representing the four wards. Each ward also had an elected community board that considered local issues.

Geography of the four wards

This urban ward contained the old Henderson borough as well as the suburbs of Glendene, Te Atatu South, and Te Atatu Peninsula (formerly Te Atatu North). There were 40,086 residents in 2001. It was located immediately to the west of Auckland city, some 10 kilometres from the city centre, along the western shores of the Waitemata Harbour and its southwestern arm, the Whau River.

Although this area was principally urban, it also had some farms and lifestyle blocks in the north and west. The ward contained the suburbs of Whenuapai, Hobsonville, West Harbour, Massey, Ranui, and Henderson North. It had a population of 51,369 in the 2001 census. It was located to the north of the Henderson Ward, along the Waitemata's northwestern shore, and included one of New Zealand's largest concentrations of former military bases, with former large army and air force stations within the ward.

Centered on the old boroughs of New Lynn and Glen Eden, it also contained the suburbs of Kelston, Green Bay, Titirangi, Kaurilands, Waima, and Woodlands Park. The ward had a population of 49,845 in 2001. New Lynn Ward was to the south of Henderson Ward, and extended to the shore of the Manukau Harbour at its southern end. New Lynn itself is 10 kilometres southwest of Auckland city centre.

This ward was by far the largest in area as it encompassed the sparsely populated Waitakere Ranges, as well as some of the urban fringes as the city expanded westward into former orchards and farms. The population of 27,450 in 2001 was the smallest of the wards, but it was also the fastest growing. It encompassed the suburbs, villages and localities of Swanson, Henderson Valley, Sunnyvale, Oratia, Waiatarua, Laingholm, Parau, Cornwallis, Huia, Whatipu, Karekare, Piha, Anawhata, Bethells / Te Henga, and Waitakere township. Many of these had volunteer fire brigades to protect their communities from the summer bush fires. This ward lay to the west of the three other wards, and extended to the north as well. Its northern end, around Muriwai, was the furthest part of Waitakere from Auckland city centre, lying some 30 kilometres to the northwest of it.

The walking tracks and sights of the Waitakere Ranges attract thousands from the Auckland region in suitable weather, as do the black-sand surf beaches of Piha, Karekare and Bethells. These beaches are notoriously dangerous for surfers and swimmers who must take great care to avoid their treacherous rips.

The city has a football club playing in the New Zealand Football Championship, Waitakere United, as well several clubs competing in the regional Northern League competition. The Nelson Trusts Stadium holds many sports and entertainment events.

There was extensive work by the council in the 2000s to pave and improve pathways around the streams in Henderson and there are now several miles of excellent walking / cycling tracks in the centre of Henderson and running north and south. Together with major restoration works along the streams it is known as the Project Twin Streams.

"Westie" is the nickname given to locals because of the city's location relative to the rest of Auckland. The west area traditionally was mostly populated by blue-collar workers, although with rising housing costs in the rest of Auckland this has changed somewhat.

Much as Manukau City and Papakura's administrative geography roughly paralleled an unofficial area commonly known as South Auckland, so too Waitakere City had an unofficial equivalent in "West Auckland". The official and unofficial areas did not exactly coincide, and – again like Manukau, Papakura and South Auckland – it was the areas with a similar socio-economic mix, roughly from Te Atatu to Glen Eden, Henderson to New Lynn, Massey and Avondale which were most commonly associated with the nickname.

All content from Kiddle encyclopedia articles (including the article images and facts) can be freely used under Attribution-ShareAlike license, unless stated otherwise. Cite this article:
Waitakere City Facts for Kids. Kiddle Encyclopedia.