Walking with Dinosaurs is a 2013 family film about dinosaurs set in the Late Cretaceous period, 70 million years ago. The production features computer-animated dinosaurs in live-action settings with actors Justin Long, John Leguizamo, Tiya Sircar, and Skyler Stone providing voice-overs for the main characters. It was directed by Neil Nightingale and Barry Cook from a screenplay by John Collee.

The film was produced by BBC Earth and Evergreen Films and was titled after the BBC's 1999 television documentary miniseries of the same name. The film, with a budget of US$80 million, was one of the largest independent productions at the time. It was financed by Reliance Big Entertainment and IM Global instead of a major studio. The majority of distribution rights were eventually sold to 20th Century Fox. The crew filmed footage on location in the U.S. state of Alaska and in New Zealand, which were chosen for their similarities to the dinosaurs' surroundings millions of years ago. Animal Logic designed computer-animated dinosaurs and added them to the live-action backdrop. Though the film was originally going to lack narration or dialogue, 20th Century Fox executives decided to add voiceovers, believing it would connect audiences to the characters.

Walking with Dinosaurs premiered on 14 December 2013 at the Dubai International Film Festival. It was released in cinemas in 2D and 3D on 20 December 2013. Critics commended the film's visual effects, but derided its subpar storyline and the juvenile quality of the voiceover performances. The film grossed US$36.1 million in the United States and Canada and US$90.5 million in other territories for a worldwide total of US$126.5 million. The Hollywood Reporter stated the film's global box office performance was disappointing in context of the production budget and marketing costs.

A paleontologist named Zack takes his nephew Ricky and niece Jade on a fossil hunt. While alone, Ricky is met by a talking raven named Alex, who turns into an Alexornis. He tells him of a story set in the Cretaceous period 70 million years ago. Patchi is the smallest in a litter of Pachyrhinosaurus hatchlings, and is often bullied by his older brother Scowler. Their father Bulldust is the leader of the Pachyrhinosaurus herd. Alex, who is Patchi's mentor, tries to help Patchi impress a female Pachyrhinosaurus named Juniper, but her herd migrates south without him. Patchi is also attacked by a Troodon which attempts to take him away but is saved by Bulldust, resulting in Patchi having a hole in his frill as an injury which Alex claims that Patchi was "destined for greatness".

Bulldust moves his herd south as well, but when they try to pass through a forest, they are forced to flee when a storm strikes and a fire erupts. Taking advantage of the chaos, a pack of Gorgosaurus attacks the scattered herd. They kill the rest of Patchi and Scowler's family while their leader Gorgon fights and kills Bulldust, who had been trying to protect Patchi and Scowler. Afterwards, Patchi's herd (now led by Bulldust's rival Major) combines with Juniper's as they continue their migration. There, Gorgon's pack attacks them again. In the ensuing chaos, Patchi, Scowler, and Juniper fall into a river and are swept downstream to the ocean, with Alex following them from above. At a beach, Scowler follows a herd of Edmontosaurus to find food, callously leaving Patchi and Juniper behind. The two make their way through a forest and eventually are able to find their herd and Scowler.

After years of making the same migration from north to south and vice versa, an adult Scowler becomes the herd's new leader after defeating Major, and chooses Juniper to be his mate, much to Patchi's disappointment. Scowler recklessly leads the herd onto a frozen lake, but Patchi is able to lead the majority of the herd to safety. Enraged and believing Patchi to be usurping him and also trying to take Juniper from him, Scowler confronts Patchi and challenges him for a battle in exchange for leadership of the herd. Scowler quickly gains the upper hand and wins as he disowns Patchi before ordering Juniper and the rest of the herd to leave him as well as Alex behind. Despondent and heartbroken, Patchi, who had gotten trapped under a tree during the fight, tries to allow predators to kill him, but Alex convinces him to die for something worth dying for as Bulldust did.

Reinvigorated by the advice, Patchi escapes and fights off the predators, before returning to the herd, only to find them under attack by Gorgon and his pack again. As Gorgon overpowers him in battle, a repentant Scowler orders Patchi to save himself and lead the herd to safety. Instead, Patchi leads them into fighting off Gorgon and his pack. The herd successfully forces the Gorgosaurus pack to back off while Patchi defeats Gorgon by breaking his arm which had gotten caught in the hole in Patchi's frill, saving Scowler. Scowler reconciles with Patchi and then concedes leadership of the herd to him, while Patchi goes on to have eggs with Juniper, one of which hatches and Alex asks for it to be named after him. In the present day, moved by Alex's story, Ricky returns the Gorgosaurus tooth to Zack and Jade, who have discovered Gorgon's skull buried in the ground. 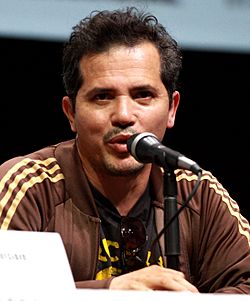 In the film, the story of the dinosaurs is book-ended by live-action footage. Long, Leguizamo, Sircar, and Stone provide voiceovers for the computer-animated dinosaurs, while the book-end scenes star Urban as an uncle taking his nephew and niece, played by Rowe and Rice, to a dinosaur excavation site. For the role of Alex, Leguizamo said he sought to conceal his own accent and create a unique voice for Alex. He adopted a Spanish accent since parrots had a Latin American origin. He said, "What was most difficult was finding the right pitch, because Alex is a small bird, but he's also the story's narrator. So he also had to sound paternal and patriarchal." Leguizamo compared his accent to that of Ricardo Montalbán, a Mexican actor. Long said he was cast based on his voicing of the chipmunk Alvin in Alvin and the Chipmunks (2007) and its sequels.

Variety reported, "[Director] Nightingale describes the project as 'mainstream entertainment' rather than natural history... but draws accurately on the latest discoveries in paleontology." A team of scientific and technical consultants contributed to the film. One team member was Dr. Steve Brusatte of the University of Edinburgh, who is a Chancellor's Fellow in Vertebrate Palaeontology. Brusatte said the filmmakers strove to understand the discoveries about dinosaurs since the release of Jurassic Park in 1993, "They used so much of this information that we've learned over the past few decades, about feathered dinosaurs, about how dinosaurs lived in big herds, which dinosaurs preyed on each other, their environments, and used that to tell the story."

The Gorgosaurus is one of the film's main dinosaurs and is depicted with iridescent scales. Its appearance was scrutinized for palaeontological accuracy due to findings of preserved feathers in other tyrannosaurs.

Some dinosaurs in the film are feathered. Brusatte said, "Over the past 15 years, we have collected thousands of specimens of feathered dinosaurs – proper bona fide dinosaurs covered in feathers." New Scientist reported that "no evidence has yet been found" to suggest that the Pachyrhinosaurus or the Gorgosaurus were feathered. Director Cook said of the Gorgosaurus, "We decided that we wouldn't put feathers on that one, but we did give that dinosaur iridescent scales." National Geographic said, "Many paleontologists and dinosaur fans are disappointed that CGI docudrama's villains, a gaggle of iridescent Gorgosaurus, are devoid of any fluff or fuzz." Shortly after the filmmakers designed their Gorgosaurus for the film, the tyrannosauroid Yutyrannus was discovered with direct evidence of feathers. While older than Gorgosaurus, Yutyrannus provides further evidence of feathers in tyrannosauroids. National Geographic also noted that Gorgosaurus was depicted as feathered in the 2011 direct-to-video film March of the Dinosaurs.

Palaeontologist Anthony Fiorillo was a consultant for the film and helped determine what dinosaurs lived in Alaska at the time. Fiorillo said "the first known track" of a therizinosaur in Alaska was discovered in 2012, which was too late to include in the film's lineup of dinosaurs. The palaeontologist said based on ongoing research of the Pachyrhinosaurus perotorum, which he discovered in Alaska in 2012, he would have modified his advice to the filmmakers about designing the film's Pachyrhinosaurus.

Don Lessem, a writer who specializes in dinosaurs, said Walking with Dinosaurs was an improvement from Jurassic Park in how the dinosaurs fit the period. He found most of the dinosaurs to be depicted correctly but also highlighted the possibility of the Gorgosaurus having feathers. Lessem stated the Alaskan scenery, while "a spectacular backdrop", did not exist at the time, "Conifers excepted, such scenery did not exist in dinosaur-age Alaska. Think woody outskirts of Seattle instead. Rainy and cool. No grand Rockies. Or much grass. And not much snow or ice."

In 2014, a shortened 45-minute version of Walking With Dinosaurs was released in 3D theaters across the U.S.A. Unlike the movie, this documentary is narrated in a style similar to that of the TV series, and removes the character names and dialogue. Unlike the series though, Prehistoric Planet 3D has a "profile" appear whenever a new prehistoric animal species shows up; this profile shows the animal's name and diet. The Gorgosaurus that appeared in the movie are referred to as Nanuqsaurus; this is probably because other than a few possible indeterminate remains, Gorgosaurus is not known from Alaska, while Nanuqsaurus is.

All content from Kiddle encyclopedia articles (including the article images and facts) can be freely used under Attribution-ShareAlike license, unless stated otherwise. Cite this article:
Walking with Dinosaurs (film) Facts for Kids. Kiddle Encyclopedia.