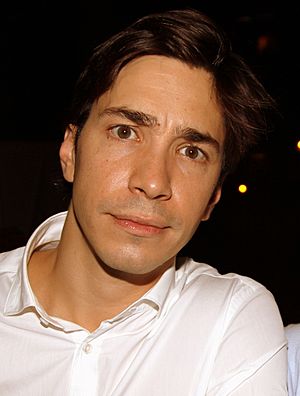 Long was born the middle son of three boys in Fairfield, Connecticut, to father R. James Long, a philosophy and Latin professor at Fairfield University, and mother Wendy Lesniak, a former actress who has mostly appeared on stage. His older brother, Damian, is a local stage actor, teacher, and theatre director at Weston High School. Long attended Fairfield College Preparatory School, a Jesuit school, and Vassar College, where he was a member of the sketch comedy group Laughingstock and starred in several plays, including Butterflies Are Free. 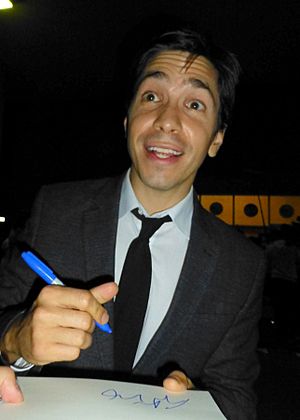 Justin Long at the premiere of Tusk, 2014 Toronto Film Festival

He also provided the voice of Humphrey in Alpha and Omega (2010), starring with Hayden Panettiere. Also in 2010, Long starred in the comedy film Going the Distance with Drew Barrymore. He was cast as a one-armed Civil War veteran in Robert Redford's The Conspirator.

He had a relationship with Drew Barrymore, but they broke up in July 2008. He also dated Amanda Seyfried from mid-2013 for two years, breaking up in September 2015. Long has also dated Chvrches frontwoman Lauren Mayberry.

All content from Kiddle encyclopedia articles (including the article images and facts) can be freely used under Attribution-ShareAlike license, unless stated otherwise. Cite this article:
Justin Long Facts for Kids. Kiddle Encyclopedia.