Alvin and the Chipmunks: The Squeakquel facts for kids

In the sequel, during a charity benefit concert in Paris, France, David Seville is seriously injured from a backstage accident, when a cardboard cutout of Alvin sends him flying across the stage. Having to recuperate there, Dave asks his aunt, Jackie, to look after the Chipmunks, Alvin, Simon, and Theodore.

Dave makes Alvin, Simon and Theodore go to school, saying that it is "good for them." He does not know that the Chipmunks feel like "Chipmunks Out of Water" because of all the (human) children around.

Meanwhile, Ian (after the Chipmunks dealt him a serious blow) is freed from jail and searches the world for animals who can sing and dance. He finds the Chipettes and cannot wait to make them famous and get back at the Chipmunks. When the Chipmunks meet the Chipettes, both groups really like each other. 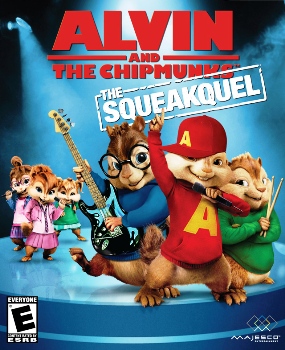 Cover art for Alvin and The Chipmunks game - released 2009

All content from Kiddle encyclopedia articles (including the article images and facts) can be freely used under Attribution-ShareAlike license, unless stated otherwise. Cite this article:
Alvin and the Chipmunks: The Squeakquel Facts for Kids. Kiddle Encyclopedia.