Washington Square West is a neighborhood in downtown, or Center City, Philadelphia, Pennsylvania. The neighborhood roughly corresponds to the area between 7th and Broad Streets and between Chestnut and South Streets[contradictory], bordering on the Independence Mall tourist area directly northeast, Market East to the northwest, Old City and Society Hill to the East, Bella Vista directly south, Hawthorne to the southwest, and mid-town Philadelphia and Rittenhouse Square to the west. In addition to being a desirable residential community, it is considered a hip, trendy neighborhood that offers a diverse array of shops, restaurants, and coffee houses. Washington Square West contains many gay-friendly establishments and hosts annual events celebrating LGBT culture in Philadelphia including OutFest. The area takes its name from Washington Square, a historic urban park in the northeastern corner of the neighborhood.

Philadelphia's Antique Row lies in the area as does the nation's oldest hospital, Pennsylvania Hospital. Educational and medical facilities associated with Thomas Jefferson University, a leading regional medical university and health care center, are located within the neighborhood. The one-time headquarters of the former Curtis Publishing Company and the University of the Arts lie at the edges of the neighborhood.

Washington West's real estate is mixed commercial, residential and service industries, characterized by two, three, and four-story rowhouses interspersed with condominiums, mid-rise apartments, hospitals and offices with ground-floor retail. The neighborhood follows William Penn's original grid layout for the city, with many one-lane and pedestrian side streets added later as the population became more dense. In addition to the block sized Washington Square Park to the East, the neighborhood contains the smaller Kahn Park, named after the Philadelphia architect Louis Kahn.

The name "Washington Square West" came into official use in the late 1950s and early 1960s as part of Edmund Bacon's comprehensive plan for Center City. In this plan, the south-east quadrant of center city was split into Washington Square East (more commonly known as Society Hill) and Washington Square West. Both neighborhoods were scheduled for urban renewal by Philadelphia's City Planning Commission and Redevelopment Authority. After a period of decline in the early 20th century, city officials hoped that redevelopment would clean up the neighborhood and clear blighted areas.

After large-scale renewal of Washington Square East/Society Hill in the early 1960s, the Philadelphia Redevelopment Authority turned to Washington Square West. In the late 1960s, the Redevelopment Authority bought and demolished buildings and, by the mid-1970s, owned one-fifth of the neighborhood. By this time, however, federal money available for urban renewal had declined and the city was no longer able to fund the renewal of Washington Square West. Buildings razed by the city in the 1960s and 1970s were left as empty lots and the neighborhood was left in a state of decline.

Through the late 1970s and 1980 began a slow recovery without the aid of the large-scale redevelopment that had occurred in Society Hill. The 1990s saw a shift in the neighborhood as Mayor Ed Rendell encouraged investment in Center City and gentrification began to take hold. By the end of the 1990s and early 2000s, the neighborhood had transformed into an economically vital community.

The Washington Square West Historic District was added to the National Register of Historic Places in 1984. The 61-acre (250,000 m2) area encompasses 450 contributing buildings. Located in the district and separately listed are the Clinton Street Historic District, Roberts-Quay House, and Portico Row. 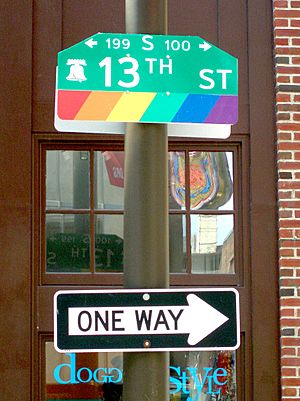 A decorated street sign on the edge of Philadelphia's Gayborhood

The area approximately located around Chestnut, Pine, Juniper and 11th Streets within Washington Square West is known as The Gayborhood. It is so-named because of its large concentration of gay and lesbian friendly small businesses, services, restaurants, and gay bars. The area is the location for Philadelphia's annual OutFest: National Coming Out Day celebration. On 18 April 2007, the city of Philadelphia officially recognized the area by adding 36 gay pride rainbow flag symbols to street signs bordering the Gayborhood area. 32 additional signs were added in June 2010. On 25 June 2015, rainbows, indicating LGBT pride, were painted onto crosswalks on the corner of 13th and Locust Streets.

Its success as a city neighborhood has led to several attempts at large scale private development in the Gayborhood in the 2000s. In 2002, developer Tony Goldman attempted to change 13th Street and its surroundings into the "Blocks Below Broad" or "B3", with the launch of several new retail establishments. The attempt failed, but was repeated in 2006 by a merchants association organized by James McManaman. The organization has attempted to re-brand the neighborhood as "Midtown Village." The association has been successful in launching several new retail establishments along 13th Street, but the name Midtown Village has been met with ambivalence by locals. An effort to change the name to MidVil is underway.

All content from Kiddle encyclopedia articles (including the article images and facts) can be freely used under Attribution-ShareAlike license, unless stated otherwise. Cite this article:
Washington Square West, Philadelphia Facts for Kids. Kiddle Encyclopedia.