Waterford is a borough in Erie County, Pennsylvania, United States. The population was 1,517 at the 2010 census. It is part of the Erie Metropolitan Statistical Area.

Waterford is an independent municipality located entirely within (and completely surrounded by) Waterford Township and is located near the geographic center of the township.

According to the United States Census Bureau, Waterford borough has a total area of 1.2 square miles (3.2 km2), of which 0.02 square miles (0.04 km2), or 1.18%, is water. Lake LeBoeuf lies immediately south of the borough and is part of the French Creek watershed, draining south to the Allegheny River. 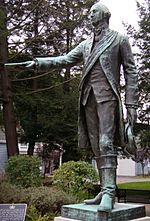 A statue of George Washington wearing the uniform of the Virginia militia.

There were 558 households, out of which 35.7% had children under the age of 18 living with them, 57.7% were married couples living together, 12.5% had a female householder with no husband present, and 26.7% were non-families. 21.7% of all households were made up of individuals, and 10.6% had someone living alone who was 65 years of age or older. The average household size was 2.60 and the average family size was 3.01.

Waterford is said to contain the only statue of George Washington wearing a British uniform, but in reality, he had been sent by the Governor of Virginia and is wearing the uniform of an officer in the Virginia Militia. In December 1753, at age 21, Washington was asked by Governor Dinwiddie to carry a British ultimatum to the French on the Ohio frontier. Washington delivered the message at Fort Le Boeuf in present-day Waterford. The message, which went unheeded because he delivered it to the wrong person, called for the French to abandon their development of the Ohio Country to the south. The two colonial powers were heading toward worldwide conflict, the Seven Years' War, known as the French and Indian War in North America.

All content from Kiddle encyclopedia articles (including the article images and facts) can be freely used under Attribution-ShareAlike license, unless stated otherwise. Cite this article:
Waterford, Pennsylvania Facts for Kids. Kiddle Encyclopedia.