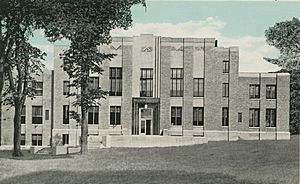 Waverly is a city in Bremer County, Iowa, United States. The population was 10,394 at the time of the 2020 census. It is the county seat of Bremer County and is part of the Waterloo–Cedar Falls Metropolitan Statistical Area.

The first permanent residents of Waverly were settled there against their will. Because of their alleged assistance given to Chief Black Hawk during the Blackhawk War of 1832, the Winnebago were forced to cede their lands east of the Mississippi and to move to Neutral Ground in what is now northeastern Iowa. They were to receive $270,000 ($10,000 per year for 27 years) and were required to surrender several of their tribesmen accused of murdering whites during the war. At that time there were three tribes living in the area, the Winnebagoes numbering about 500, the Mesquakie numbering about 100 and the Pottawattomies numbering about 50. With Iowa statehood in 1846, the Winnebago were moved again. In an 1845 treaty, the Winnebago exchanged their Iowa lands for the 800,000-acre (3,200 km2) Long Prairie (Crow Wing River) reserve in Minnesota and $190,000. In 1848 a detachment of United States troops from Fort Atkinson, Iowa came to enforce the removal. All told, between 1840 and 1863 the Winnebagoes were moved five times. They were pushed first to northeastern Iowa, then to Long Prairie, Minnesota, then to Blue Earth, Minnesota, then to Crow Creek, South Dakota. In 1865, after the constant upheaval cost 700 tribal members’ lives, the current Winnebago Reservation in Nebraska was established by the treaties of 1865 and 1874. The tribe lost more than two thirds of this land in the General Allotment Act of 1887. By 1913, only 120,000 acres (490 km2) of cropland, woodland, and pasture remained. The tribe is federally recognized and organized under the 1934 Indian Reorganization Act. The Winnebago Tribe established a constitution in 1936 which was amended in 1968.

Frederick Cretzmeyer is credited with being the first settler in Waverly, having purchased 160 acres (0.6 km2) in 1852, he built a log hut on the east side of the Cedar River (or what was once called the Red Cedar River). Soon more homes were constructed as other settlers arrived, with some of their later homes built just over the hill behind the old recycling center.

William Patterson Harmon came to Waverly in the spring of 1853 with the idea of establishing a town and a saw mill. He purchased most of what is now Waverly from the United States Government for $1.25 an acre. The area was incorporated as a town on April 25, 1859, according to the Library of the State of Iowa. (A centennial celebration was held in August 1956.) Two stories exist on how the town was named. The speaker at the ceremony was said to have been a fan of Sir Walter Scott’s Waverley Novels and when it came time to name the town (which settlers had wanted to call Harmonville or Harmon) he inadvertently called it Waverly. The myth goes that Jennie Harmon Case later wrote that it was her father who was the speaker and that he made the decision to name the town after the favorite book, instead of the proposed "Harmonville." Coincidentally, Bremer County’s name also honors a person eminent in literature. Bremer was named in 1850 by Governor Hempstead, who was an admirer of the Swedish feminist author Fredrika Bremer.

The first school was started by Charles Ensign in a log cabin in 1854. A stone school house was erected by 1855, and additional schools were built in 1861 and 1868. The first graduating class of the Waverly High School was the class of 1875 with two students. Wartburg College moved to Waverly from Clinton, Iowa in 1856. The public library was established in 1866.

In 2014, the Waverly East Bremer Avenue Commercial Historic District was listed on the National Register of Historic Places. Among the noted buildings in the listing is the WPA-era post office, which contains a mural designed by artist Mildred W. Pelzer for the Section of Painting and Sculpture, later called the Section of Fine Arts, of the Treasury Department. The painting, called A Letter from Home in 1856, depicted a farm family pausing during plowing to read a letter from their former home.

There were 3,546 households, of which 29.0% had children under the age of 18 living with them, 54.2% were married couples living together, 8.0% had a female householder with no husband present, 2.5% had a male householder with no wife present, and 35.3% were non-families. 28.3% of all households were made up of individuals, and 14% had someone living alone who was 65 years of age or older. The average household size was 2.34 and the average family size was 2.86.

Waverly may have the highest national per capita concentration of ordained Evangelical Lutheran Church in America (ELCA) clergy. One estimate in the 1990s suggested Waverly had 37 ordained ELCA clergy, with a population of about 9,000. This estimate was made during the days preceding the ELCA decision regarding Called to Common Mission. If accurate, this would equal a ratio of 1 clergy member for every 243 people. Waverly is also home to St. John Lutheran Church, which is affiliated with the Lutheran Church–Missouri Synod. 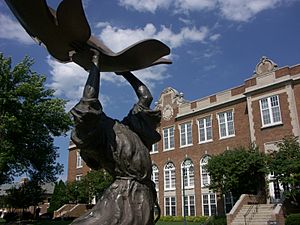 Wartburg College, maintained by the Evangelical Lutheran Church in America, is a four-year liberal-arts college in Waverly that opened in 1852. In the 2016–2017 school year, the college had an enrollment of 1,482 students.

The Waverly-Shell Rock Community School District operates local public schools and is made of seven schools including four elementary schools, a middle school (grades 5 through 8), a high school, and a residential alternative high school. The district strives "to create a passion for learning that will sustain students for a lifetime". In the 2005–06 school year, the district had 2,020 K-12 students, of whom 1,823 were regular education students and 197 were special education students. Thirty-four of the special education students are served in Greenview High School, an alternative high school program. Waverly-Shell Rock Senior High completed building a new auditorium and gymnasium in 2008.

St. Paul's Lutheran School "is committed to providing quality education in an environment where Christian faith is taught, learned and lived". In the 2010–2011 school year, 139 students were enrolled in K-6 and 87 students in pre-school. More than half of the students come from neighboring congregations and assistance is given to families who demonstrate financial need. The school offers a Gifted and Talented program, a "Partners in Education Program", which allows students and residents at Bartels Lutheran Retirement Community to work together, and several unique opportunities in the fine arts.

In 1993, Waverly Light & Power Company became the first public power system in the Midwest to own and operate wind generation. The Zond 80 kW turbine was installed on a farm just outside the city. In 1999, two 75 kW turbines were added near Alta, Iowa. They are part of the 259 turbines on a wind farm near Storm Lake. In 2001, the first turbine was replaced by a 90 kW turbine which has produced 111,000kwh in 15 days. WLP has set a goal known as "20 by 20-20" which means they are striving to generate 20% of its energy with renewable sources by the year 2020. The latest step in reaching that goal is to build a new ISEP energy park in Dallas County.

All content from Kiddle encyclopedia articles (including the article images and facts) can be freely used under Attribution-ShareAlike license, unless stated otherwise. Cite this article:
Waverly, Iowa Facts for Kids. Kiddle Encyclopedia.