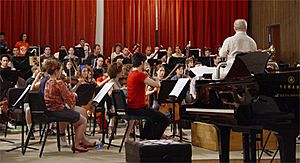 The West-Eastern Divan is an orchestra for young people. It is based in Sevilla, Spain. The musicians in the orchestra come from Israel and its surrounding Arab countries.

The orchestra was started in 1999 by the Jewish conductor Daniel Barenboim and the Palestinian-American academic Edward Said (pronounce: Sah—eed). The name of the orchestra comes from a group of poems by the German poet Johann Wolfgang von Goethe.

The West-Eastern Divan Orchestra was started to help bring Israelis and Palestinians together to work for peace and to help solve the fight between Israel and Palestine. The idea was to let Israelis and Arabs work together in countries which had nothing to do with the conflict.

The first workshop of the orchestra took place in Weimar, Germany because it was the 1999 European cultural town. Barenboim chose two leaders for the orchestra: one Israeli and one Arab. They worked with some very famous musicians including the cellist Yo Yo Ma. In 2000 the orchestra met again in Weimar, in 2001 they met in Chicago. Since 2002 they have met every year in Seville.

The West-Eastern Divan Workshop takes place during several weeks each summer in Andalusia. After the workshop has finished, the orchestra travel to other places to give concerts. They have given concerts in many parts of Europe, North America, South America. In 2004 they performed an historic concert in Ramallah in Palestine. After the concert Barenboim said that the people of Israel and Palestine had a shared future. He said: “Either we all kill each other, or we share what there is to share. It is this message that we come here to bring."

In 2004, the Barenboim-Said Foundation, based in Seville, was started to help develop several education projects. Money is given for this by the Junta de Andalucía (Regional Government of Andalusia). The Foundation helps with the orchestra as well as with projects such as the Early Childhood Musical Education Project in Seville.

The orchestra has won prizes and made recordings. A film called Knowledge is the Beginning was made about them.

In August 2009 the orchestra will give three concerts at the BBC Proms including a concert performance of Beethoven’s opera Fidelio which has a story about people who have been put in prison for their political ideas.

All content from Kiddle encyclopedia articles (including the article images and facts) can be freely used under Attribution-ShareAlike license, unless stated otherwise. Cite this article:
West-Eastern Divan Orchestra Facts for Kids. Kiddle Encyclopedia.