West Branch Run (also known as West Branch Little Fishing Creek ) is a tributary of Little Fishing Creek in Lycoming County and Columbia County, in Pennsylvania, in the United States. It is approximately 7.3 miles (11.7 km) long and flows through Jordan Township, Lycoming County and . The area of the stream's watershed is 10.20 square miles (26.4 km2). The stream's only named tributary is Shingle Run. West Branch Run flows through a valley known as California Hollow, which is listed as a "locally significant site" on the Columbia County Natural Areas Inventory. The Shoemaker Covered Bridge also crosses the stream, as does at least one other bridge in Lycoming County. 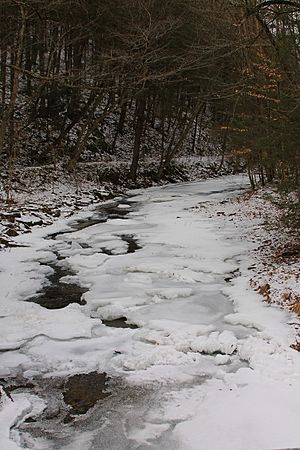 West Branch Run begins in Jordan Township, Lycoming County and flows southwest for more than a mile. It then turns south-southwest and flows for slightly over a mile until it exits Jordan Township. Upon leaving Jordan Township, the stream enters Pine Township. Here, it turns southwest for a short distance before turning southeast near Pine Summit. The stream then flows through a fairly narrow valley known as California Hollow for some distance. At the end of the valley, it receives Shingle Run, its only named tributary, and abruptly turns south. After more than a mile, West Branch Run passes the Shoemaker Covered Bridge, crossing Pennsylvania Route 442 on the way, and turns southeast. It then crosses Pennsylvania Route 442 again and shortly afterwards reaches its confluence with Little Fishing Creek.

The watershed of West Branch Run has an area of 10.20 square miles (26.4 km2). There are no roads along West Branch Run where it flows through California Hollow. The stream is one of only a few streams in Columbia County with this property.

California Hollow, which West Branch Run flows through, is listed as a "locally significant site" on the Columbia County Natural Areas Inventory.

Hemlock and white pine inhabit the slopes of California Hollow. According to the Columbia County Natural Areas Inventory, it may have a high level of diversity among native plants and few invasive plants.

All content from Kiddle encyclopedia articles (including the article images and facts) can be freely used under Attribution-ShareAlike license, unless stated otherwise. Cite this article:
West Branch Run Facts for Kids. Kiddle Encyclopedia.