Little Fishing Creek is a tributary of Fishing Creek in Sullivan County, Lycoming County, and Columbia County, in Pennsylvania, in the United States. It is approximately 23.5 miles (37.8 km) long and flows through eight townships. The watershed of the creek has an area of 68.1 square miles (176 km2). The creek has six named tributaries, of which the largest are Spruce Run and West Branch Run.

There are at least two major rock formations in the watershed of Little Fishing Creek: the Chemung Formation and the Hamilton Group. The creek's watershed includes part of the Greenwood Valley. Much of the watershed is forested and major roads in it include Pennsylvania Route 42. The first European settler first arrived in the vicinity of the creek during the 1760s or 1770s, with other settlers arriving in the 1790s. A number of sawmills, woolen mills, and tanneries historically operated on the creek. A number of covered bridges have also been built over it and there were historically some railroads in the watershed. 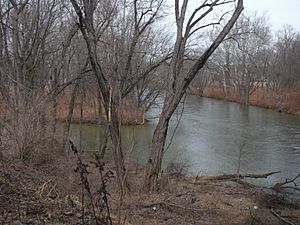 Upon exiting Lycoming County, Little Fishing Creek enters Jackson Township, in Columbia County. It flows southeast along the western border of Jackson Township and then turns southwest, following the border, and passes Huckleberry Ridge. The creek then leaves Jackson Township and continues flowing along the border between Pine Township and Greenwood Township. After several miles, it starts flowing parallel to Pennsylvania Route 42 receives the tributary Branch Run. The creek then passes by the western edge of Millville and continues flowing south roughly parallel to Pennsylvania Route 42. Downstream of Millville, it crosses Pennsylvania Route 254. Several miles downstream, it passes Eyers Grove, where it receives the tributary Spruce Run and leaves behind Greenwood Township. The creek then flows along the western border of Mount Pleasant Township and continues to flow alongside Pennsylvania Route 42. After some distance, the creek passes Mordansville and reaches the southern border of Mount Pleasant Township several miles later. Little Fishing Creek enters Fishing Creek at the border between Mount Pleasant Township and Bloomsburg.

All but one of the tributaries of the Little Fishing Creek upstream of the United States Geological Survey stream gauge empty into it from the right. The creek has a number of small tributaries in ravines in Pine Township. Little Fishing Creek's named tributaries include Spruce Run, West Branch Run, Lick Run, Wolfhouse Run, Devil Hole Run, and Little Brier Run. Spruce Run and West Branch Run are the largest, with watershed areas of 9.80 square miles (25.4 km2) and 10.20 square miles (26.4 km2), respectively.

A total of 2.4 miles (3.9 km) of Little Fishing Creek are considered impaired due to pathogens of an unknown source.

One type of soil series found in the vicinity of Little Fishing Creek is the Middlebury Series. This soil series ranges from deep and fairly well-drained to poorly-drained alluvial soil. It consists of Tioga soils and Holly soils. All of the rock in the creek's watershed upstream of the United States Geological Survey's stream gauge is shale or sandstone. A fairly narrow band of rock of the Hamilton Group is located near the creek. Rock outcroppings of the Chemung Formation are visible in Hemlock Township, approximately 1 mile (1.6 km) upstream of Fishing Creek. Rock formations consisting of shale and sandstone are present in the vicinity of the creek. Numerous riffles occur on parts of Little Fishing Creek. There are also strainers in places.

Pennsylvania Route 42 follows Little Fishing Creek for a significant portion of its length. However, the creek is relatively far from it between Millville and Eyers Grove. Major communities in the watershed of the creek include Millville, Iola, Eyers Grove, and Mordansville. Between its headwaters and Talmar Road, 6 percent of the creek's length is on open public land. 44 percent is on closed private land and 50 percent is on open private land. 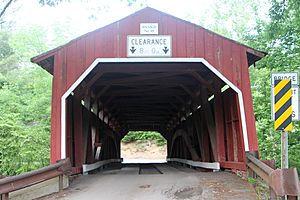 Little Fishing Creek was entered into the Geographic Names Information System on August 2, 1979. Its identifier in the Geographic Names Information System is 1179545. The creek is named for the fact that it is smaller than Fishing Creek, which it is a tributary of. Little fishing Creek is also known as Hemlock Creek. This variant name appears in a 1982 map of Columbia County published by the Pennsylvania Department of Transportation.

John Mordan settled on Little Fishing Creek in Mount Pleasant Township in the 1790s. He also built the first sawmill in Mount Pleasant Township on Little Fishing Creek. When numerous other settlers arrived in the vicinity of Mordan's mill, the area became known as Mordansville. There was also once an obscure gristmill on an island on the creek. The Catawissa Railroad historically went up the valley of the creek.

Little Fishing Creek serves as a water supply source for nearby communities such as Millville. Slate has been quarried on the creek and limestone has also been produced there. In the early 1900s, there were woolen mills and tanneries in the watershed and agriculture was also practiced. The creek also powered several small gristmills. The Susquehanna, Bloomsburg, and Berwick Railroad historically crossed the watershed and followed the creek between its mouth and Millville.

The drainage basin of Little Fishing Creek is designated as Exceptional Value waters and a Migratory Fishery upstream of the tributary Lick Run in the community of Sereno. The creek's watershed downstream of Lick Run is designated as a Coldwater Fishery and a Migratory Fishery, as is the watershed of Lick Run itself. The creek is considered by the Pennsylvania Fish and Boat Commission to be Class A Wild Trout Waters from its headwaters to Talmar Road: a distance of 4.3 miles (6.9 km). A part of the tributary Lick Run is also considered to be Class A Wild Trout Waters. Ruffed grouse occur in large numbers on Little Fishing Creek north of Iola. They also occur on Spruce Run, a tributary of the creek. Little Fishing Creek has a significant riparian buffer throughout most of Jackson Township.

It is possible to canoe on 11.4 miles (18.3 km) of Little Fishing Creek during snowmelt or within two days of heavy rain. The difficulty rating of the creek is 1. Edward Gertler describes the scenery along the creek as "good to poor". However, Gertler also describes the creek as "a disappointing little feeder to Fishing Creek" states that it "does not do justice to the beautiful countryside through which it flows".

All content from Kiddle encyclopedia articles (including the article images and facts) can be freely used under Attribution-ShareAlike license, unless stated otherwise. Cite this article:
Little Fishing Creek Facts for Kids. Kiddle Encyclopedia.