Spruce Run is a tributary of Little Fishing Creek in Columbia County, Pennsylvania, in the United States. It is approximately 6.9 miles (11.1 km) long and flows through Madison Township. The watershed of the stream has an area of 9.80 square miles (25.4 km2). Several people settled on the stream in the 1780s and 1790s. Two bridges were built over it in the 20th century.

Spruce Run is designated as a "Locally Significant Area" in the Columbia County Natural Areas Inventory. More than 80 species of woodland herbs and numerous trees, mammals, and birds inhabit the area near the stream. The Pennsylvania State Game Lands are also in the watershed. 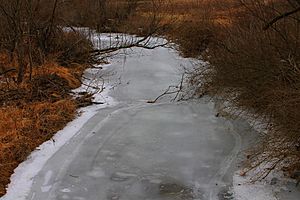 Spruce Run frozen over in January

Spruce Run begins in a valley in northern Madison Township, approximately 1 mile (1.6 km) south of the Columbia/Lycoming county line. It flows southeast for approximately a mile and then east for a slightly shorter distance, running parallel to Spruce Run Road. The stream then turns east-southeast and its valley widens considerably. Over the next few miles, the stream's valley gets broader and shallower and eventually it stops flowing parallel to Spruce Run Road. It then crosses Pennsylvania Route 254 and turns southeast for a few miles. The stream's valley becomes narrower again in its lower reaches. Shortly afterwards, it reaches its confluence with Little Fishing Creek near the community of Eyers Grove.

The watershed of Spruce Run has an area of 9.80 square miles (25.4 km2). The upper reaches of the stream are in the Pennsylvania State Game Lands Number 226. There are no all-terrain vehicle trails along the stream and the Columbia County Natural Areas Inventory opposes the addition of any.

A number of people settled on Spruce Run in the late 1700s. Peter Brugler, a former resident of Jersey, settled on the western side of the stream in 1779 or 1780 and James Masters, another former Jersey resident settled there in 1786. George Runyon arrived at the stream in 1796 and also settled there. In 1791, James Masters built a sawmill, chopmill, and fulling mill on the stream. This was one of the first industries in Madison township.

There are eastern hemlock and mixed hardwood forests along Spruce Run. There is also a high level of diversity of birds near the stream. Red salamanders and black-throated green warblers have the potential to inhabit the areas near the stream.

In addition to eastern hemlock, tree species that live near Spruce Run include yellow birch, black birch, basswood, sugar maple, white ash, beech, and black cherry. There are more than 80 species of woodland herbs in the area, including 15 fern species and 12 sedge species. However, invasive plants such as the multiflora rose and the autumn olive also inhabit the area near the stream.

Spruce Run is listed as a "Locally Significant Area" in the Columbia County Natural Areas Inventory.

All content from Kiddle encyclopedia articles (including the article images and facts) can be freely used under Attribution-ShareAlike license, unless stated otherwise. Cite this article:
Spruce Run (Little Fishing Creek tributary) Facts for Kids. Kiddle Encyclopedia.