Wolfhouse Run is a tributary of Little Fishing Creek in Columbia County, Pennsylvania, in the United States. It is approximately 2.9 miles (4.7 km) long and flows through Pine Township. The watershed of the stream has an area of 2.03 square miles (5.3 km2). The steam is considered to be an Exceptional Value stream and a Coldwater Fishery. However, it is considered to be impaired as well. At least two bridges and one sawmill have been built over or on the stream. 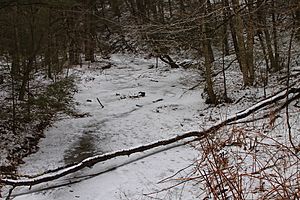 Wolfhouse Run is considered to be impaired by road runoff for its entire length. However, a total maximum daily load has not been created for the stream.

Wolfhouse Run is in the United States Geological Survey quadrangle of Lairdsville. The mouth of the stream is in the west-central portion of Greenwood Township. Additionally, the stream is near Millville.

A sawmill was constructed on Wolfhouse Run by Richard Greenly in 1835. However, it was destroyed by a cloudburst in June 1836. Greenly returned to the area and rebuilt the sawmill in 1841. J.L. Eves was the final owner of the sawmill. A number of bridges have also been built over the stream. A steel stringer bridge was built over Wolfhouse Run in 1952 and repaired in 2003. It is 21.0 feet (6.4 m) long and is located 2.5 miles (4.0 km) northeast of the community of Sereno. Another bridge was built over the stream in 1952 at a location 2 miles (3.2 km) north of Sereno. It is a concrete slab bridge that is 21.0 feet (6.4 m) long. It was repaired in 1988.

Wolfhouse Run is commonly thought to be named after a den of wolves. However, it is actually named after a cabin owned by a family named Wolf.

Wolfhouse Run is designated as an Exceptional Value stream. Wild trout inhabit the stream and it is designated by the Pennsylvania Fish and Boat Commission as a wild trout stream.

All content from Kiddle encyclopedia articles (including the article images and facts) can be freely used under Attribution-ShareAlike license, unless stated otherwise. Cite this article:
Wolfhouse Run Facts for Kids. Kiddle Encyclopedia.