The Noongar name for the western ground parrot is kyloring.

Described as a separate species by Alfred John North in 1911, on account of its distinctive plumage. North compared Western Australian specimens, at the Australian Museum, collected by George Masters in the 1860s at a location noted as King George Sound. The specific name, flaviventris, is derived from the Latin terms flavus "golden-yellow" and venter "belly". The western ground parrot was subsequently considered a subspecies of the eastern ground parrot by Gregory Mathews in 1912. He felt it not distinctive enough to warrant specific rank. Other authorities followed suit, until a 2010 molecular study revealed its genetic distinctness from populations in eastern Australia and Tasmania. The third species in genus is the endangered and mysterious night parrot (Pezoporus occidentalis). The phylogenetic position of the genus Pezoporus within the parrot family remains unclear. 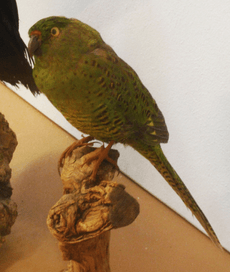 Historically, this species was found all along the coast of western southwest Australia from Perth north to Geraldton and along the South Coast east to Israelite Bay. However, it appears to have vanished from the west coast of Western Australia by 1900. Nowadays, the range of this species is limited to two locations along the south coast of Western Australia, east of Albany with the largest population in Cape Arid National Park.

Low heathland usually on deep white sand with a large diversity of plants is the most common habitat. Parrots appear to be more abundant in heath which has not been burnt for decades, but have been found in areas six years after a burn. There is usually a fairly high component of sedges.

This species is one of the rarest bird species in the world. The first photo of the western ground parrot in the wild was taken in 2004. This species has rapidly declined between 1990 and 2009 from about 400 individuals to 110 individuals. Most individuals (~100) are found in the Cape Arid National Park. The species has not yet been evaluated by the IUCN, but it meets several criteria to be considered critically endangered. The main threats are introduced predators, such as foxes and feral cats, as well as wildfires. It is listed as "critically endangered" by the Australian Government. Much of the local vegetation is vulnerable to Phytophthora cinnamomi dieback and it is unclear what impact the loss of certain food items may have on the species, but there is believed to be less than 40 parrots left.

In November 2015, intense bushfires around Esperance burnt almost all of the western ground parrot's habitat. The impact on the population is unclear. 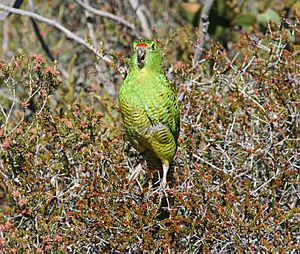 The western ground parrot usually feeds alone or with one other bird. They are rarely seen because they rarely fly or call during daylight, and they are usually hidden among low vegetation. Their plumage offers a good camouflage. If flushed it will fly low over the vegetation, then land again up to 100 or so metres away. Flight when flushed is characterised by a zigzag pattern with short gliding phases and rapid wingbeats. Calling periods are at dusk and early morning before the sun rises; it is a variable high-pitched call audible for some distance and answered by neighbouring members of the species.

Seeds of various plants especially sedges. e.g. Mesomaelaena stygia ssp. stygia. Flower buds and the base of flowers e.g. beaufortias, dryandras and grevilleas are also important parts of the diet. A western ground parrot has been observed feeding on the semi-succulent leaves of Daviesia pachyphylla. The diet is varied and utilises the high diversity of their habitat. 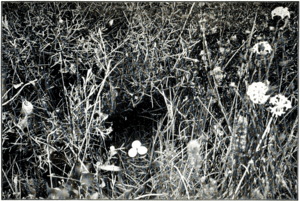 Photo of nest published in The Emu. Whitlock, 1913.

In November 2018 a western ground parrot nest (not in use) was found in Cape Arid National Park during field work carried out by the Department of Parks and Wildlife. This was the first new discovery of a nest since the discovery made in 1913 by F. Lawson Whitlock, who described the nest as a slight depression among low prickly vegetation (possibly the genus Hakea) on a low ridge. Fledglings have been recorded from September to November. Males feed females on the ground in "mate-feeding arenas", arriving silently just after dusk. Females elicit food from the male by issuing a short rasping begging call (termed scree). On hot dry days the male has difficulty in moving his crop contents as he does not go to water sources during the day. Instead he derives his liquid from the plant material ingested. Hence when the day is hot and dry the crop contents becomes thick and difficult to regurgitate. In the later periods of nesting the female becomes very insistent and will even chase the male when he stops feeding her. Typically at the end of feeding his mate the male gives a loud call and moves a short distance away, while the female leaves undetected from the area. The male may then roost near this site. The nest can be as much as 400 m (1300 ft) from this area, as indicated by the presence of a nearly fledge chick of a known pair monitored in 2005. The female can lay up to five eggs in a recess within a clump of low vegetation which she lines with vegetation. A vacant nest may have been found in 1989 by Ray Garstone while working in Fitzgerald River National Park. While the long unburnt habitat is necessary for nesting it is often adjacent to younger more recently burnt habitat which can provide a richer and more varied food source. Being among the few ground nesting parrots the young ground parrots leave the nest before fledge and are only capable of short unsteady flight. These young have only been seen on two occasions in the last 90 years. Post fledging the young are assumed to be attended by the male (field indications support this).

Seven critically endangered western ground parrots have been transferred by the Department of Parks and Wildlife of Western Australia in July 2014 from a secluded south coast enclosure in Western Australia to the Perth Zoo, where it is hoped they will breed.

All content from Kiddle encyclopedia articles (including the article images and facts) can be freely used under Attribution-ShareAlike license, unless stated otherwise. Cite this article:
Western ground parrot Facts for Kids. Kiddle Encyclopedia.