The night parrot (Pezoporus occidentalis) is a small parrot endemic to the continent of Australia. It has also been known as porcupine parrot, nocturnal ground parakeet, midnight cockatoo, solitaire, spinifex parrot and night parakeet. It is one of the most elusive and mysterious birds in the world, with no confirmed sightings of the bird between 1912 and 1979, leading to speculation that it was extinct. Sightings since 1979 have been extremely rare and the bird's population size is unknown, though based on the paucity of records it is thought to number between 50 and 249 mature individuals, and it is classified by the IUCN as an endangered species.

A few sightings or recordings of its presence, with varying degrees of certainty, have occurred in the Pilbara region of Western Australia, south-western Queensland, the Lake Eyre basin in South Australia and the Northern Territory. However, some of the evidence produced by wildlife photographer John Young has been called into question, and in March 2019 the Australian Wildlife Conservancy (AWC) retracted some of the records created by Young and published by the AWC.

Ornithologist John Gould described the night parrot in 1861, from a specimen—the holotype—that was collected 13 km southeast of Mt Farmer, west of Lake Austin in Western Australia. Its specific epithet is Latin occidentalis "western". The species was originally placed within its own genus (Geopsittacus) by Gould, though consensus soon swung in favour of placing it in Pezoporus; James Murie dissected a specimen, observing that it was very similar in anatomy and plumage to the ground parrot. Gould had posited a relationship to the kakapo based on similarity of the plumage, however Murie concluded they were markedly different anatomically. Despite its close relationship with the ground parrot, its placement in the genus Pezoporus was uncertain, with some authorities leaving it in its own genus, as data on the night parrot was so limited. A 1994 molecular study using the cytochrome b of several parrot species confirmed the close relationship of the taxa and consensus for its placement in Pezoporus. It also revealed that the kakapo was not closely related to Pezoporus. Analysis of mitochondrial and nuclear DNA sequences in a 2011 study showed that the night parrot most likely diverged from the ancestor of the eastern and western ground parrots around 3.3 million years ago.

A relatively small and short-tailed parrot, the species' colour is predominantly a yellowish green, mottled with dark brown, blacks and yellows. Both sexes have this coloration. It is distinguished from the two superficially similar ground parrot species by its shorter tail and different range and habitat. Predominantly terrestrial, taking to the air only when panicked or in search of water, the night parrot has furtive, nocturnal habits and—even when it was abundant—was apparently a highly secretive species. Its natural habitat appears to be the spinifex grass which still dominates much of the dry, dusty Australian interior; other early reports also indicate that it never strayed far from water. It may also inhabit chenopod shrublands, eucalyptus woodlands, and mallee shrublands. One of the vocalisations of the night parrot has been described as a croak and identified as a contact call. Other calls, mostly short "ding-ding" whistles, and a more drawn out whistle, have been recorded from Queensland and Western Australia. 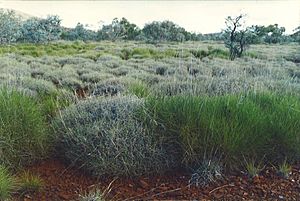 The population size of this species is not known, but assumed to be continuing to decline. As of August 2020[update], it is listed on the IUCN Red List as Endangered, having previously been listed as Critically Endangered. According to the IUCN Red List the night parrot has a population of 50–249, or possibly larger. It is listed as Endangered under the Environment Protection and Biodiversity Conservation Act 1999 by the Australian government.

Sites identified by BirdLife International as being important for night parrot conservation are the Diamantina and Astrebla Grasslands of western Queensland, and the Fortescue Marshes of the Pilbara.

The night parrot remains one of the most elusive and mysterious birds in the world of ornithology. Reliable records of the bird have been few and far between, with efforts to locate the species proving fruitless after an authenticated report from 1912.

In 1979, ornithologist Shane Parker from the South Australian Museum spotted an apparent flock of the birds in the far north of South Australia. A roadkill specimen was discovered in 1990 by scientists returning from an expedition in a remote part of Queensland.

Three individuals seen near Minga Well, Pilbara region of Western Australia and near the Fortescue Marshes.

The approval of the A$2 billion Cloud Break mine project through the then-Minister for the Environment, Ian Campbell, was criticised because of a number of endangered species in the area of the future mine, among them the night parrot. In order to gain EPA approval, the mine had to implement a management plan to ensure that mining activities would not have a negative effect on the species survival in the area. The occurrence of the night parrot in the future mining area, at Minga Well on 12 April 2005, was discovered during a 2005 survey commissioned by FMG, which was carried out by two contract biologists, Robert Davis and Brendan Metcalf, who sighted a small group of the birds. Unconfirmed sightings of the bird had been made previously in a nearby area in 2004.

The sighting was at dusk, and Davis and Metcalf were not able to obtain a photograph of the three birds they saw, but are confident that they spotted three night parrots. The detailed descriptions of their sighting were accepted by the Birds Australia Rarities Committee (BARC), making it the first accepted night parrot sighting in modern times. Based on this acceptance by scientific peers, a paper describing the sighting was published in the Australian ornithological journal, Emu, in 2008. The two biologists carried out further searches at Minga Well and Moojari Well the following five nights after the sighting, but were unable to see the birds again. A follow up survey of the Fortescue Marsh area in May 2005 was unsuccessful in finding any conclusive evidence of the species. 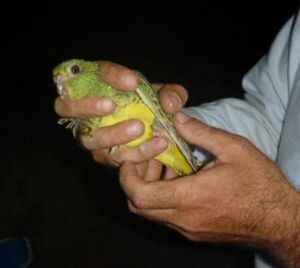 On 4 April 2015, ornithologist Steve Murphy and partner Rachel Barr captured and radio tagged a live individual, whom they nicknamed "Pedro", in southwestern Queensland. Photographs of the bird in Murphy's hand were released to Australian media on 10 August 2015, while keeping the precise location secret. A conservation reserve covering some 56,000 hectares has been created in the area to protect the species. In August 2015 the finding was announced on Australian media.

Sean Dooley of Birdlife: The Magazine described the find as, "The bird watching equivalent of finding Elvis flipping burgers in an outback roadhouse". South Australian Museum collection manager Philippa Horton called the find, "One of the holy grails, one of the world's rarest species probably".

In October 2018, Australian Wildlife Conservancy (AWC) commenced an investigation into claims that some of John Young's first photographs of the night parrot may have been staged, after Australian National University ornithologist Penelope Olsen, author of Night Parrot: Australia's Most Elusive Bird raised concerns. Young resigned from the AWC in September 2018, and the AWC removed all information about the night parrot from its website.

In March 2019, Young's reports were found to have issues relating to robustness of much of his work done in Queensland and South Australia, labelled as unscientific, deceptive and damaging to the AWC. In 2019, the AWC retracted its reports based on work done by Young. A panel of experts had looked at the nest and eggs found at Diamantina (2016); the feather found at Kalamurina (2017); and the recording of the call (2018). They found that each one had separate issues and none could be said to provide robust evidence of the parrot's presence.

All content from Kiddle encyclopedia articles (including the article images and facts) can be freely used under Attribution-ShareAlike license, unless stated otherwise. Cite this article:
Night parrot Facts for Kids. Kiddle Encyclopedia.