White Hall Creek is a tributary of East Branch Chillisquaque Creek in Columbia County and Montour County, in Pennsylvania, in the United States. It is approximately 3.8 miles (6.1 km) long and flows through Madison Township in Columbia County and Anthony Township and Derry Township. The watershed of the creek has an area of 2.31 square miles (6.0 km2). All streams in its watershed are impaired by siltation due to agriculture. The creek is a Warmwater Fishery. 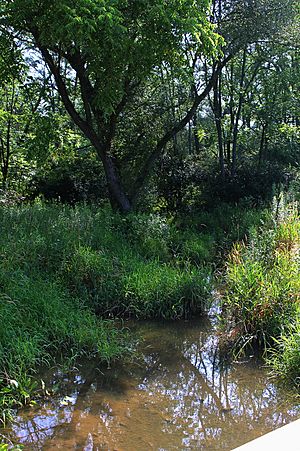 The entire length of White Hall Creek and all the other streams in its watershed are designated as impaired waterbodies. The cause of the impairment is siltation and the source is agriculture.

White Hall Creek is designated as a Warmwater Fishery. The water quality of the creek would be improved by the addition of further riparian buffering in some reaches.

A bridge carrying Preserve Road over White Hall Creek was built in 1937. It was 17 feet (5.2 m) long and was located 3.5 miles (5.6 km) east of Pennsylvania Route 54 in Anthony Township, Montour County. However, by 2012, a Pennsylvania Department of Transportation bridge crew had replaced the bridge with a precast concrete box culvert.

White Hall Creek was listed as impaired in 1998. The total maximum daily load date is 2011.

All content from Kiddle encyclopedia articles (including the article images and facts) can be freely used under Attribution-ShareAlike license, unless stated otherwise. Cite this article:
White Hall Creek Facts for Kids. Kiddle Encyclopedia.