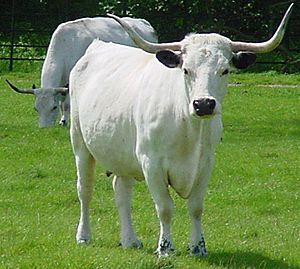 The White Park is a rare breed of cattle.

The White Park is a rare breed of ancient horned cattle primarily residing in Great Britain. Two similar semi-feral populations, the Chillingham Wild Cattle in Northumbria and the Vaynol cattle from Gwynedd in North Wales, have a separate breed status. There are relatively small numbers of the White Park cattle in the United States, where they are commonly known as the Ancient White Park in order to distinguish them from the American White Park, which is a population of the British White breed.

The White Park is a medium-large, long-bodied bovine. A program of linear assessment, including 200 bulls and 300 cows, has been carried out in the UK since 1994 to define its size and conformation. The weight of a mature bull varies from 800 to 1,000 kilograms (1,800 to 2,200 lb), depending on the quality of grazing, while adult cows are typically 500 to 700 kilograms (1,100 to 1,500 lb). Their coloration is a distinctive porcelain white with coloured (black or red) points. The horns of the cows can vary in shape, but the majority grow forwards and upwards in a graceful curve. The horns of the bulls are thicker and shorter. In their native environment in Britain, White Park cattle are known for their distinctive appearance and their grazing preference for coarse terrain. White Park cattle are well-suited to non-intensive production. Some herds are kept outside throughout the year on rough upland grazing without shelter or supplementary feed. They are docile, easy-calving, and have a long productive life. Some traits may vary depending on their location.

Until recently, White Park cattle were a triple-purpose breed used for meat, milk and draught. The 3rd Lord Dynevor (1765–1852) kept a team of draught oxen, and the practice continued up to 1914. They were used as dairy cattle even more recently. Some cows were being milked in the Dynevor herd in 1951, but yields were moderate. Beef became the main product during the twentieth century, and gained a reputation as a textured meat, with excellent flavor and marbling, which commanded a significant premium in specialty markets.

The white park, a breed I’ve never eaten before and had always assumed was purely ornamental, was really excellent: softly chewy, with that strong, distinctive, almost corrupt flavour of proper beef 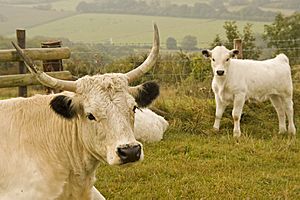 White Park cow and calf on Hambledon Hill in England

Several blood typing and DNA studies have revealed the genetic distinctness of White Park cattle. The colour-pointed coat pattern also appears in other cattle breeds such as the Irish Moiled, the Blanco Orejinegro [es], the Berrenda, the Nguni and the Texas Longhorn. The breeds most closely related seem to be the Highland cattle and Galloway cattle of Scotland, but the White Park "is genetically far distant from all British breeds".

The Chillingham breed has diverged from the main White Park population and various stories have grown up around them. 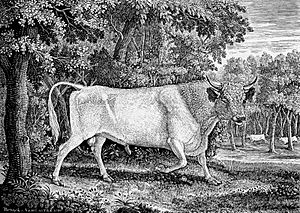 Wood engraving by Thomas Bewick of a Chillingham Bull, 1789

Two thousand years ago a type of cattle, similar to the White Park breed, were found through much of Britain and Ireland, particularly in Ireland, Wales, northern England and Scotland. At about that time in Ireland, there are references in the Cúchulain cycle to the sacrifice at Magh Aí of three hundred white cows with colored ears. Either it was a common colour at that time or, more likely, it was a colour specially prized and maintained for ritual and ceremony. The first issue of the Royal Dublin Society Historical Studies in Irish Agriculture is a book on ancient Irish cattle breeds which states that white cattle were known in Ireland until at least the 1820s, although they became extinct in Ireland in that century. Similar references are found in Welsh history at a slightly later period. Pembroke in western Wales remained a main centre of the breed until the nineteenth century and they were driven in large numbers to the pastures of the Severn and the neighboring markets in England.

In 1225, as a result of legislation passed by Henry III, several parks were enclosed and several herds, including those at Chartley and Chillingham in England, and Cadzow in Scotland, were "emparked". There were more than a dozen white Park Cattle herds in Britain in the early 19th century, but most of these were exterminated by the turn of the next century.

The Park Cattle registration program in Britain was started in the early 1900s, but by 1946 only the Dynevor, Woburn, Whipsnade, and Cadzow herds survived as domesticated herds; the ancient herds at Vaynol (Faenol) and Chillingham having become semi-feral. Registration of White Park Cattle lapsed in the 1940s due to the outbreak of World War II. Later in 1973, the Rare Breeds Survival Trust was formed in Britain, and the following year the registration program was revived for the remaining British herds in the "White Park" herd book. Numbers have increased and now exceed 1,000 breeding cows in the UK. 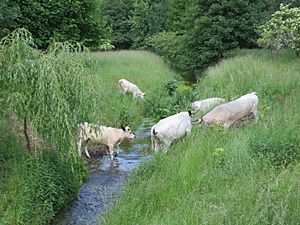 Since 2011, White Park cattle have been grazing in the nature reserve "Karower Teiche" in the northeast of Berlin, Germany.

Most national populations of White Park cattle have been DNA tested to verify parentage, to confirm the provenance of products, and to enable assignment of applicant animals to breed and determine the optimum breeding program to ensure their effective conservation survival. The breeding program in the UK aims to increase the desirable characteristics of the breed while maintaining genetic diversity, as heterogeneity is low due to inbreeding through much of the twentieth century. Faygate Brace (born 1906) contributed c. 40% of the ancestry of the breed by the 1940s, and Whipsnade 281 (born 1956) repeated this pattern in the second half of the twentieth century. His grandson, Dynevor Torpedo is now the dominant influence in the breed. Two herds, Dynevor and Chartley/Woburn, have been the dominant influences throughout this time. The global population now is almost 2,000 purebred females, plus bulls and young stock.

All content from Kiddle encyclopedia articles (including the article images and facts) can be freely used under Attribution-ShareAlike license, unless stated otherwise. Cite this article:
White Park cattle Facts for Kids. Kiddle Encyclopedia.