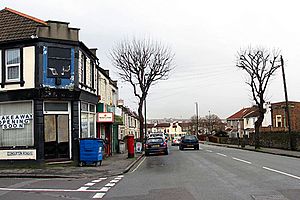 Whitehall, is a district on the northeastern edge of central Bristol, within the electoral ward of Easton.

The local green space is Whitehall Playing Fields or Packer's Ground as it was known, taking its name from the local chocolate factory - Packers. In 2006 the company, known as Elizabeth Shaw, announced the closure of the site. In 2014 plans to convert it into flats and housing. The playing field is to be fully redeveloped for sports use for The City Academy Bristol school.

All content from Kiddle encyclopedia articles (including the article images and facts) can be freely used under Attribution-ShareAlike license, unless stated otherwise. Cite this article:
Whitehall, Bristol Facts for Kids. Kiddle Encyclopedia.