Peter Bernhard Wilhelm Heine, better known as Wilhelm (or William) Heine (January 30, 1827 in Dresden – October 5, 1885 in Lößnitz bei Dresden) was a German-American artist, world traveller and writer as well as an officer during the American Civil War. 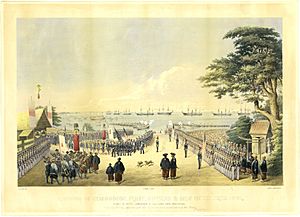 Commodore Perry and his party landing at Yokohama to meet the Shogun's Commissioners (lithograph, 1855)

Heine was born in Dresden, the son of Ferdinand Heine, a comedian engaged at the Dresden Court Theatre. His family connections included composer Richard Wagner, whose father had been a family friend.

Heine studied at the Royal Academy of Art in Dresden and in the studio of Julius Hübner. Then he continued his artistic studies for three years in Paris. He returned to Dresden getting work as a scene designer for the court theatre and giving painting classes. He fled to New York in 1849, following the suppression of the May Uprising in Dresden in which he participated. In this he was aided by Alexander von Humboldt.

He set up his artist studio at 515 Broadway, and soon established his reputation as an artist. After meeting the archaeologist and diplomat, Ephraim George Squier, Heine was invited to accompany him, as an artist, on his consular duties to Central America. Proceeding ahead of Squier, he collected and recorded indigenous plants and animals and compiled notes for future publications. Until Squier arrived, Heine stood in as consul, negotiating a commercial agreement between the Central American countries and the United States, which he delivered to Washington. The record of this expedition was published in 1853 as the Wanderbilder aus Zentralamerika. While in Washington, he met President Millard Fillmore and Commodore Matthew Perry, and was selected from among several scores of applicants for the post of official artist to the Perry expedition to Japan.

Nominally attached to Perry's expedition as an Acting Master's Mate; he served on the flagship USS Mississippi under Sydney Smith Lee. Heine visited Okinawa, the Bonin Islands, Yokohama, Shimoda and Hakodate during 1853 and 1854 (Edo, however, remained closed to the members of the American expedition, and Heine was not to visit the city until 1860, when he returned to Japan as a member of the Prussian Expedition). The sketches he produced of the places he visited and the people he encountered there, together with the daguerreotypes taken by his colleague Eliphalet Brown Jr., formed the basis of an official iconography of the American expedition to Japan which remains an important record of the country as it was before the foreigners arrived in force.

Upon his return to New York in 1855 he published several books: a collection of prints entitled Graphic Scenes of the Japan Expedition; 400 sketches which were included in Perry's official report; and his memoirs, Reiss um die Welt nach Japan (Leipzig, 1856). The memoirs were very successful, and were immediately translated into both French and Dutch.

Going back to Prussia he published a German translation of the report of the Rodgers Expedition sent by the US government to Japan, China and Okhotsk Seas, under the title Die Expedition in dir Seen von China, Japan und Okhotsk (Leipzig, 1858-9) and Japan und Seine Bewohner (Leipzig, 1860). Here he urged the Prussian government to send more expeditions to Asia before the Americans became established there. This was taken up and while in Berlin he received an invitation to join the Eulenberg Expedition as official artist once again, and was simultaneously given a premium to send back reports for a Köln newspaper. During this trip he met up with Mikhail Bakunin in Yokohama, who was in the process of returning to Europe, following his escape from Siberia. Eventually, in 1864, he would published his major work, a voluminous book on travel in the Orient, Eine Weltreise um die nördliche Hemisphare in Verbindung mit der Ostasiatischen Expedition in den Jahren 1860 und 1861 (Leipzig, two volumes).

Learning of the outbreak of the American Civil War; the Forty-Eighter returned and volunteered for the Union Army. He joined the 1st Maryland Infantry Regiment before being commissioned a Captain of Topographical Engineers. Serving in the Army of the Potomac, Heine was captured during the Peninsula Campaign and briefly was in Libby Prison before being exchanged. In late 1862 he was arrested and accused of revealing too much information of the Union defenses in his drawings. Also being wounded he was honorably discharged as "unfit for service." In 1863 he rejoined the army as Colonel of the 103rd New York Infantry, a regiment made up mainly of German-Americans. Later he commanded a brigade and then a small division in the Army of West Virginia. In 1865 he was made a Brevet Brigadier General but was accused of disobedience and left the army. In the next year he became a U.S. clerk to the Paris and Liverpool consulates. After the establishment of the Hohenzollern Empire in Germany in 1871, he returned to Dresden where he wrote his last book about Japan, Japan, Beiträge zur Kenntnis des Landes und seiner Bewohner (Berlin, 1873–80).

All content from Kiddle encyclopedia articles (including the article images and facts) can be freely used under Attribution-ShareAlike license, unless stated otherwise. Cite this article:
Wilhelm Heine Facts for Kids. Kiddle Encyclopedia.