William of Rubruck facts for kids

William of Rubruck (Dutch: Willem van Rubroeck; Latin: Gulielmus de Rubruquis; fl. 1248 – 1255), also known as Willem van Ruysbroeck, Guillaume de Rubrouck, or Willielmus de Rubruquis, was a Flemish Franciscan missionary and explorer. He is best known for his travels to various parts of the Middle East and Central Asia in the 13th century, including the Mongol Empire. His account of his travels is one of the masterpieces of medieval geographical literature, comparable to those of Marco Polo and Ibn Battuta.

William was born in Rubrouck, Flanders. In 1248, he accompanied King Louis IX of France on the Seventh Crusade. On 7 May 1253, on Louis' orders, he set out on a missionary journey to convert the Tatars to Christianity. He first stopped in Constantinople to confer with Baldwin of Hainaut, who had recently returned from a trip to Karakorum, the capital of the Mongol Empire, on behalf of Baldwin II, Latin Emperor. There, William received letters to some of the Tatar chiefs from the emperor.

William then followed the route of the first journey of the Hungarian Friar Julian, and in Asia that of the Italian Friar Giovanni da Pian del Carpine. With William's party were Bartolomeo da Cremona, an attendant called Gosset, and an interpreter named in William's report as Homo Dei, meaning "man of God", perhaps representing the Arabic Abdullah, "servant of God". William of Rubruck's was the fourth European mission to the Mongols: previous ones had been led by Giovanni da Pian del Carpine and Ascelin of Lombardia in 1245 and André de Longjumeau in 1249. The King had been encouraged to send another mission by reports of the presence of Nestorian Christians at the Mongolian court, but because of an earlier rebuff he declined to send a formal mission.

After reaching the Crimean town of Sudak, William continued his trek with oxen and carts. Nine days after crossing the Don, he met Sartaq Khan, ruler of the Kipchak Khanate. The Khan sent William on to his father, Batu Khan, at Sarai near the Volga River. Five weeks later, after the departure from Sudak, he reached the encampment of Batu Khan, Mongol ruler of the Volga River region. Batu refused conversion but sent the ambassadors on to the Great Khan of the Mongols, Möngke Khan.

William and his travelling companions set off on horseback on 16 September 1253 on a 9,000-kilometre (5,600 mi) journey to the court of the Great Khan at Karakorum. Arriving in late December they were received courteously, and he was given an audience on 4 January 1254. William's account provided an extensive description of the city's walls, markets and temples, and the separate quarters for Muslim and Chinese craftsmen among a surprisingly cosmopolitan population. He also visited the court of the Vastacius (Empire of Nicaea) during the feast day of Felicitas and met Nicaean envoys during his travels. Among the Europeans he encountered were the nephew of an English bishop, a woman from Lorraine who cooked William's Easter dinner, and a French silversmith who was making ornaments for the Khan's women and altars for the Nestorian Christians. Guillaume Boucher was the Frenchman.

William stayed at the Khan's camp until 10 July 1254, when they began their long journey back home. After spending two weeks in late September with Batu Khan, and Christmas at Nakhchivan in present-day Azerbaijan, he and his companions reached the County of Tripoli on 15 August 1255. 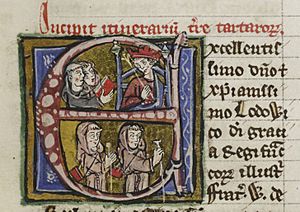 An initial from a 14th-century copy of the manuscript. The upper portion shows William of Rubruck and his travelling companion receiving a commission from Louis IX of France. The lower portion shows the two friars on their journey.

On his return, William presented to King Louis IX a very clear and precise report, entitled Itinerarium fratris Willielmi de Rubruquis de ordine fratrum Minorum, Galli, Anno gratiae 1253 ad partes Orientales. William's report is divided into 40 chapters. Chapters 1–10 relate general observations about the Mongols and their customs, while chapters 11–40 give an account of the course and the events of William's voyage.

In the report, he described the peculiarities of the Mongol Empire as well as many geographical observations. There were also anthropological observations, such as his surprise at the presence of Islam in Inner Asia. William was critical of the Hellenic traditions he encountered among the Christians of the former Byzantine Empire, including the Nicaean celebration of a feast day for Felicitas, which he reports was known to John III Doukas Vatatzes through the alleged possession of the second half of Ovid's incomplete Book of Days.

William also answered a long-standing question in demonstrating by his passage north of the Caspian Sea that it was an inland sea and did not flow into the Arctic Ocean; although earlier Scandinavian explorers like Ingvar the Far-Travelled had extensive knowledge of the region, William was the first to answer the question in written form.

The report of William of Rubruck is one of the great masterpieces of medieval geographical literature, comparable to that of Marco Polo, although they are very different. William was a good observer and an excellent writer. He asked many questions along the way and did not take folk tales and fables as literal truth. He showed a great facility with language, noting the similarities between those he encountered and those European languages he already knew.

In May 1254, during his stay among the Mongols, William entered into a famous competition at the Mongol court, as the khan encouraged a formal theological debate between the Christians, Buddhists, and Muslims, in order to determine which faith was correct, as determined by three judges, one from each faith. A Chinese participated with William in the competition.

Roger Bacon, William's contemporary and fellow-Franciscan, cited the traveller copiously in his Opus Majus, and described him as "Brother William through whom the lord King of France sent a message to the Tartars in 1253 AD ...who traveled to regions in the east and north and attached himself to the midst of these places, and wrote of the above to the illustrious king; which book I carefully read and with his permission expounded on". After Bacon, however, Rubruck's narrative seems to have dropped out of sight until Richard Hakluyt's publication now described.

All content from Kiddle encyclopedia articles (including the article images and facts) can be freely used under Attribution-ShareAlike license, unless stated otherwise. Cite this article:
William of Rubruck Facts for Kids. Kiddle Encyclopedia.