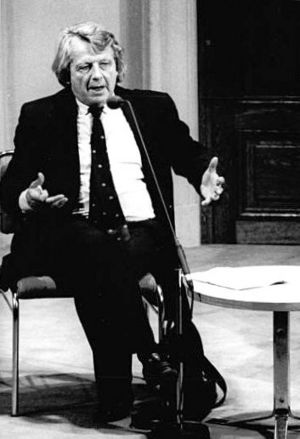 Wolfgang Leonhard (16 April 1921 - 17 August 2014) was a German political author, historian, and expert. He wrote many books on Communism and how he was against it. He was the last living member of the Ulbricht Group, an anti-communism group. Leonhard was born in Vienna, Austria to German parents.

Leonhard died at a hospital in Daun, Germany from a long-illness at the age of 93.

All content from Kiddle encyclopedia articles (including the article images and facts) can be freely used under Attribution-ShareAlike license, unless stated otherwise. Cite this article:
Wolfgang Leonhard Facts for Kids. Kiddle Encyclopedia.