The World Barista Championship (WBC) is an annual barista competition operated by World Coffee Events for the title of World Barista Champion. The competition is composed of the winners of the national barista championships, which are operated by the Specialty Coffee Association (SCA) chapters, or an approved, independent, non-profit national body.

The event is hosted in a different city every year. The next edition will be in Melbourne in November 2020.

The barista compete in Monte Carlo in 2000. The WBC was dominated in its early years by Scandinavian baristas and was held in Europe or the United States from its inception until 2007 when it was hosted in Tokyo, Japan.

In 2016, significant changes were made to the competition format: Grinders were now provided by the competition's partner (Mahlkönig), new models of espresso machines were introduced, and the cappuccino was replaced by a "milk drink" component.

In 2018, Agnieszka Rojewska became the first woman to win the World Barista Championship.

There are three rounds of judging over two days. The first round included 55 national barista champions in 2018. The top 15 competitors advance to a second (semi-finals) round, plus the addition of a wildcard placing. The final round comprises the top scoring six baristas from the semi-finals round and takes place on the last day of the competition. In each round competitors present a 15 minute routine in which they must prepare and serve a total of 12 drinks: (4) espresso, (4) milk beverages, and (4) ‘signature beverages’ (a non-alcoholic espresso-based cocktail) to each of four sensory judges. Baristas commonly perform the same routine in each of the rounds that they compete.

The four judges award points on a variety of factors including the taste and balance of the barista’s beverages as well as their presentation. A technical judge grades their technique and cleanliness in the national championships and preliminary rounds. The judges’ points are totalled to produce a final score for each barista in each round. The baristas with the highest scores advance from the first and second rounds, and the barista with the greatest score in the final round wins the title.

The national barista competitions are each organized by their respective national coffee organizations. 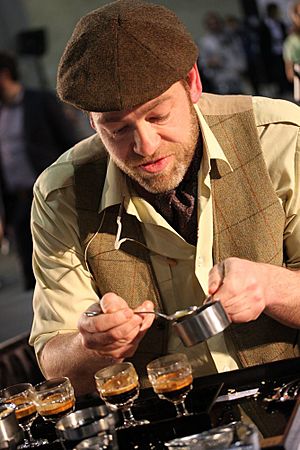 All content from Kiddle encyclopedia articles (including the article images and facts) can be freely used under Attribution-ShareAlike license, unless stated otherwise. Cite this article:
World Barista Championship Facts for Kids. Kiddle Encyclopedia.