Xerophyllum tenax is a North American species of plants in the corn lily family. It is known by several common names, including bear grass, squaw grass, soap grass, quip-quip, and Indian basket grass.

Xerophyllum tenax has flowers with six sepals and six stamens borne in a terminal raceme. The plant can grow to 15–150 cm in height. It grows in bunches with the leaves wrapped around and extending from a small stem at ground level. The leaves are 30–100 cm long and 2–6 mm wide, dull olive green with toothed edges. The slightly fragrant white flowers emerge from a tall stalk that bolts from the base. When the flowers are in bloom they are tightly packed at the tip of the stalk like an upright club. It produces small, tan coloured seeds that will germinate after a cold period of 12 to 16 weeks. The plant is found mostly in western North America from British Columbia south to California and east to Wyoming, in subalpine meadows and coastal mountains, and also on low ground in the California coastal fog belt as far south as Monterey County. It is common on the Olympic Peninsula and in the Cascades, northern Sierra Nevada and Rockies.

Xerophyllum tenax is an important part of the fire ecology of regions where it is native. It has rhizomes which survive fire that clears dead and dying plant matter from the surface of the ground. The plant thrives with periodic burns and is often the first plant to sprout in a scorched area.

Its fibrous leaves, which turn from green to white as they dry, are tough, durable, and easily dyed and manipulated into tight waterproof weaves. 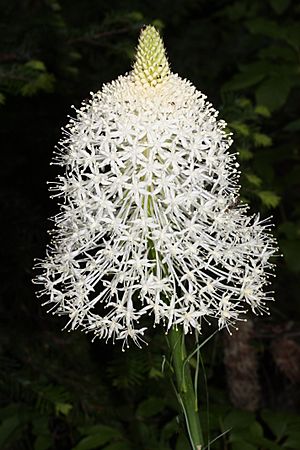 Plant colonies typically only bloom every five to seven years.

Deer and elk eat the flower and other parts of the plant. Bears eat the softer leaf bases.

The Hupa people use this plant to create a border pattern in baskets.

This species has long been used by Native Americans who weave it in baskets, and historically, roasted the rootstock for food; they also ate the pods, which are good cooked. They also braid dried leaves and adorn them on traditional buckskin dresses and jewelry.

All content from Kiddle encyclopedia articles (including the article images and facts) can be freely used under Attribution-ShareAlike license, unless stated otherwise. Cite this article:
Xerophyllum tenax Facts for Kids. Kiddle Encyclopedia.