Yucca schidigera, also known as the Mojave yucca or Spanish dagger, is a flowering plant that is native to the Mojave Desert, Chihuahuan Desert and Sonoran Desert of southeastern California, Baja California, New Mexico, southern Nevada and Arizona.

This yucca typically grows on rocky desert slopes and creosote desert flats between 300–1,200 metres (980–3,940 ft) altitude, rarely up to 2,500 metres (8,200 ft). They thrive in full sun and in soil with excellent drainage. It also needs no summer water. It is related to the Banana yucca (Yucca baccata), which occurs in the same general area; hybrids between the two are sometimes found. 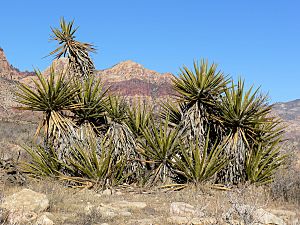 Yucca schidigera is a small evergreen tree growing to 5 metres (16 ft) tall, with a dense crown of spirally arranged bayonet-like leaves on top of a conspicuous basal trunk. The bark is gray-brown, being covered with brown dead leaves near the top, becoming irregularly rough and scaly-to-ridged closer to the ground. The leaves are 30–150 cm long and 4–11 cm broad at the base, concavo-convex, thick, very rigid, and yellow-green to blue-green in color.

The flowers are white, sometimes having a purple tinge, bell-shaped, 3–5 cm long (rarely to 7.5 cm), produced in a compact, bulbous cluster 60–120 cm tall at the top of the stem. The fruit is an elongate berry, up to 11.5 cm long.

Moths gather pollen from the flowers and deposit it on the stigma of a flower, the ovary of which they lay their eggs in; the larvae eat of the fruit capsule as it grows, but leave behind some seeds to develop into fruit.

The fibers of the Yucca schidigera leaves were used by Native Americans to make rope, cloth, and sandals. The flowers and fruit were eaten either raw or roasted, and the black seeds were ground into a flour. The roots were used to make soap. Some reports claim that Native Americans washed their hair with yucca to fight dandruff and hair loss. Among the other maladies this yucca has been used to treat are headaches, bleeding, arthritis and rheumatism.

Currently extracts from this plant are in animal feed and various herbal medications. The rigid flower stalk of the yucca, after maturation, is used as a substitute for eucalyptus stems or logs to make didgeridoos. It is also used as a natural deodorizer, and is used in pet deodorizers. Steroid saponins are produced commercially from Yucca schidigera that can be used as naturally-derived food grade surfactant. Yucca Schidigera is an ingredient that is found in a quarter of dog food sold. It is mainly included in their food to reduce the waste-odor of most pets.

Researches have also found that the ingestion of Yucca schidigera have decreased the blood cholesterol of human and chickens, increased vitamin and mineral absorption in animals, and increased cattle reproduction.

Post fire, the Mojave Yucca produces sprouts eagerly and the regeneration of the seedlings are witnessed. The fire regime is defined predominantly by heavy crop vegetation that take part in carrying the fire in the ecosystem. Over time, the invasive species that have been introduced to the ecosystem, such as grasses, have turned more fire tolerant, increasing the fire frequency and altering the fire regime that existed in the past.

Early accounts categorize the fire regime of the Mojave Desert as arid grassland and shrubland communities. For the occurrence of fire, the ecosystem was dependent on winter precipitation, where Yucca schidigera was tolerant, rarely harmed. However, the introduction of nonnative grasses led to a higher return fire interval, where the survival rate of Yucca schidigera after the occurrence of fire is low.

Yucca schidigera is mostly damaged and killed by fire. There is little evidence of surviving tissue post fire.

All content from Kiddle encyclopedia articles (including the article images and facts) can be freely used under Attribution-ShareAlike license, unless stated otherwise. Cite this article:
Yucca schidigera Facts for Kids. Kiddle Encyclopedia.