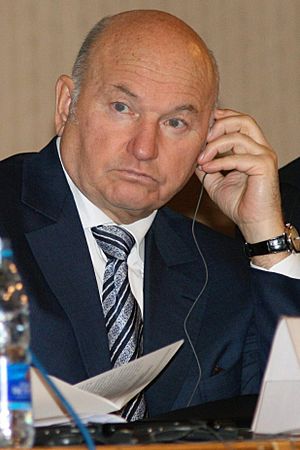 Yury Mikhailovitsch Luzhkov (Russian: Ю́рий Миха́йлович Лужко́в ) (September 21, 1936 – December 10, 2019) was a Russian politician. He was a member of the United Russia. He became the Mayor of Moscow in 1992, when Gavriil Kharitonovich Popov quit the job since he could not handle the problems that came with it. He resigned in 2010. Luzhkov was born in Moscow.

Luzhkov died at a Munich hospital from heart surgery-related problems on December 10, 2019 at the age of 83.

All content from Kiddle encyclopedia articles (including the article images and facts) can be freely used under Attribution-ShareAlike license, unless stated otherwise. Cite this article:
Yury Luzhkov Facts for Kids. Kiddle Encyclopedia.