The zebrafish (Danio rerio) is a freshwater fish belonging to the minnow family (Cyprinidae) of the order Cypriniformes. Native to the Himalayan region, it is a popular aquarium fish, frequently sold under the trade name zebra danio (and thus often called a "tropical fish" although not native to the tropics). The zebrafish is also an important and widely used vertebrate model organism in scientific research. It is particularly notable for its regenerative abilities, and has been modified by researchers to produce many transgenic strains.

The zebrafish is a derived member of the genus Danio, of the family Cyprinidae. It has a sister-group relationship with Danio aesculapii. Zebrafish are also closely related to the genus Devario, as demonstrated by a phylogenetic tree of close species. The zebrafish was referred to in scientific literature as Brachydanio rerio for many years until its reassignment to the genus Danio.

The zebrafish is native to the streams of the southeastern Himalayan region, and is found in parts of India, Pakistan, Bangladesh, Nepal, and Myanmar. The species arose in the Ganges region in eastern India, and commonly inhabits streams, canals, ditches, ponds, and slow-moving or stagnant water bodies, including rice fields. Zebrafish are most commonly found in low flow streams that has sandy substrates. Zebrafish have been introduced to parts of the United States, presumably by deliberate release or by escape from fish farms.

The zebrafish is named for the five uniform, pigmented, horizontal, blue stripes on the side of the body, which are reminiscent of a zebra's stripes, and which extend to the end of the caudal fin. Its shape is fusiform and laterally compressed, with its mouth directed upwards. The male is torpedo-shaped, with gold stripes between the blue stripes; the female has a larger, whitish belly and silver stripes instead of gold. Adult females exhibit a small genital papilla in front of the anal fin origin. The zebrafish can grow to 6.4 cm (2.5 in) in length, although it seldom grows larger than 4 cm (1.6 in) in captivity. Its lifespan in captivity is around two to three years, although in ideal conditions, this may be extended to over five years. 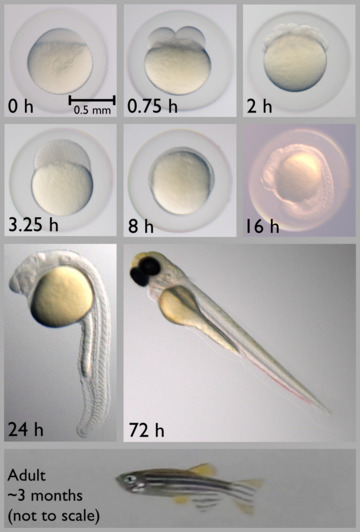 Stages of zebrafish development. Photos to scale except adult, which is ~2.5 cm (0.98 in) long.

The approximate generation time for Danio rerio is three months. A male must be present for ovulation and spawning to occur. Females are able to spawn at intervals of two to three days, laying hundreds of eggs in each clutch. Upon release, embryonic development begins; absent sperm, growth stops after the first few cell divisions. Fertilized eggs almost immediately become transparent, a characteristic that makes D. rerio a convenient research model species.

The zebrafish embryo develops rapidly, with precursors to all major organs appearing within 36 hours of fertilization. The embryo begins as a yolk with a single enormous cell on top (see image, 0 h panel), which divides into two (0.75 h panel) and continues dividing until there are thousands of small cells (3.25 h panel). The cells then migrate down the sides of the yolk (8 h panel) and begin forming a head and tail (16 h panel). The tail then grows and separates from the body (24 h panel). The yolk shrinks over time because the fish uses it for food as it matures during the first few days (72 h panel). After a few months, the adult fish reaches reproductive maturity (bottom panel).

To encourage the fish to spawn, some researchers use a fish tank with a sliding bottom insert, which reduces the depth of the pool to simulate the shore of a river. Zebrafish spawn best in the morning due to their Circadian rhythms. Researchers have been able to collect 10,000 embryos in 10 minutes using this method. Male zebrafish are furthermore known to respond to more pronounced markings on females, i.e., "good stripes", but in a group, males will mate with whichever females they can find. What attracts females is not currently understood. The presence of plants, even plastic plants, also apparently encourages spawning.

Zebrafish are omnivorous, primarily eating zooplankton, phytoplankton, insects and insect larvae, although they can eat a variety of other foods, such as worms and small crustaceans, if their preferred food sources are not readily available.

In research, adult zebrafish are often fed with brine shrimp, or paramecia.

Zebrafish are hardy fish and considered good for beginner aquarists. Their enduring popularity can be attributed to their playful disposition, as well as their rapid breeding, aesthetics, cheap price and broad availability. They also do well in schools or shoals of six or more, and interact well with other fish species in the aquarium. However, they are susceptible to Oodinium or velvet disease, microsporidia (Pseudoloma neurophilia), and Mycobacterium species. Given the opportunity, adults eat hatchlings, which may be protected by separating the two groups with a net, breeding box or separate tank. In captivity, zebrafish live approximately forty two months. Some captive zebrafish can develop a curved spine.

The Zebra Danio was also used to make genetically modified fish and were the first species to be sold as GloFish (fluorescent colored fish).

All content from Kiddle encyclopedia articles (including the article images and facts) can be freely used under Attribution-ShareAlike license, unless stated otherwise. Cite this article:
Zebrafish Facts for Kids. Kiddle Encyclopedia.