Zeno of Elea facts for kids 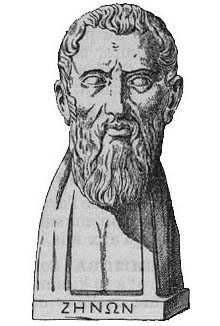 Zeno of Elea was a pre-Socratic Greek philosopher of southern Italy. He was born about 490 BC and died about 430 BC: the exact dates are not known.

Zeno a member of the Eleatic School founded by Parmenides. Aristotle called him the inventor of dialectic. He is best known for his paradoxes, which Bertrand Russell has described as "immeasurably subtle and profound".

Although many ancient writers refer to the writings of Zeno, none of his writings survive intact.

According to Proclus in his Commentary on Plato's Parmenides, Zeno produced "not less than forty arguments revealing contradictions", but only nine are now known.

Zeno's arguments are perhaps the first examples of a method of proof called reductio ad absurdum, literally meaning to reduce to the absurd. This destructive method of argument was used by him to such an extent that he became famous for it.

All content from Kiddle encyclopedia articles (including the article images and facts) can be freely used under Attribution-ShareAlike license, unless stated otherwise. Cite this article:
Zeno of Elea Facts for Kids. Kiddle Encyclopedia.