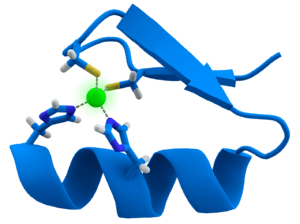 3-D representation of a zinc finger molecule. Zinc fingers are labeled blue and the zinc ion is labeled green.

Zinc finger nucleases (or ZFN) are a tool used to target genes and change DNA. It is one of three methods of changing the genome with engineered nucleases.

They have two parts. Zinc fingers are man-made molecules made of a protein and zinc. Each binds to a specific DNA. Zinc-finger nucleases (ZFNs) are enzymes got by fusing a zinc finger to a DNA cleavage enzyme called a Fokl. So the ZFN binds onto a specific DNA sequence, then snips it in two places. Regular cell enzymes stick the ends together, minus the bit snipped out (DNA repair).

Each ZFN is made to use on a single gene which is called a “target gene” or “target DNA”. They can be designed to work on specific parts of genes to create a desired change. The two types of DNA changes are mutations such as deletions and insertions. Genetics research looks at mutated animal subjects to find out what the particular gene does.

'Zinc finger' is the name of many protein structures. The zinc atom binds the proteins and makes them more stable. ZFNs bind to DNA base pairs. One zinc finger can bind about 3 base pairs by itself.

ZFN’s can only change DNA sequences they are designed for. The DNA-binding domain binds to a specific DNA sequence. Two ZFN’s designed for the same DNA sequence are needed change one gene. The DNA-binding domains bind to both strands on the DNA double helix. DNA-cleaving domains break the DNA strand and cut the gene base pairs out. Cells fix broken DNA strands on their own using DNA repair. Deletion mutations result from missing base pairs after DNA repair.

ZFNs have been used to discover gene functions in many genetics studies. ZFNs can be used to change DNA on any species. Another feature of ZFNs is that they can be used in vivo (in living organisms). They are currently used on model organisms: plants, insects, and fish.

The biggest issue with ZFNs is accidentally altering genes besides the target gene. A ZFN must be made to find the right base pairs on the target gene. These base pairs are chosen so only the target gene will have them. DNA-cleavage domains work on any DNA sequence so binding to a wrong gene sequence will change it instead. ZFNs that knock out base pairs for more than one gene are not considered accurate.

All content from Kiddle encyclopedia articles (including the article images and facts) can be freely used under Attribution-ShareAlike license, unless stated otherwise. Cite this article:
Zinc finger Facts for Kids. Kiddle Encyclopedia.