19521 Chaos is a Kuiper belt object. Chaos was found in 1998 by the Deep Ecliptic Survey, with Kitt Peak's 4 m telescope. It is big at about 560 km, and bright at H=4.755. It is named after the primeval state of existence in Greek mythology, from which the first gods appeared.

A jazz-fusion/progressive-rock band from Connecticut got their name from this minor planet. 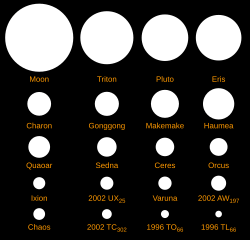 All content from Kiddle encyclopedia articles (including the article images and facts) can be freely used under Attribution-ShareAlike license, unless stated otherwise. Cite this article:
19521 Chaos Facts for Kids. Kiddle Encyclopedia.