Abu Ayyub al-Ansari (Arabic: أبو أيوب الأنصاري‎code: ar is deprecated , Turkish: Ebu Eyyûb el-Ensarî, died c. 674) — born Khalid bin Zayd bin Kulayb bin Thaalba in Yathrib — hailed from the tribe of Banu Najjar, was a close companion (Arabic: الصحابه, sahaba) and the standard-bearer of the Islamic prophet Muhammad. Abu Ayyub was one of the Ansar (Arabic: الأنصار, meaning aiders, helpers or patrons) of the early Islamic history, those who supported Muhammad after the hijra (migration) to Medina in 622. The patronym Abu Ayyub, means father (abu) of Ayyub. Abu Ayyub died of illness during the First Arab Siege of Constantinople.

Abu Ayyub was born in Medina, Hejaz as Khalid bin Zayd to Najjar family of Banu Khazraj, Abu Ayyub was the head of his family, he was one of the chosen elders in Medina who went to the valley of Aqaba and pledged allegiance to Islam at the hands of Muhammad, who named him Abu Ayyub al-Ansari. After the migration, Muhammad united Muhajiruns and Ansars into the single allegiance, Abu Ayyub was himself a descendant of Nebaioth, son of Ishmael, through al-Azd, the parent tribe of Banu Najjar.

When Muhammad arrived in Medina, all of the inhabitants of the city offered to accommodate him. It is said that he decided instead to allow his camel to walk where it chose and to stay at whomsoever's house it stopped. The camel stopped at the house of Abu Ayyub al-Ansari, a member of the Banu Najjar, who were regarded as the best of the tribes of Medina. Though Abu Ayyub al-Ansari had prepared meals for only Muhammad and Caliph Abu Bakr, Muhammad directed that everyone in the neighborhood be invited to partake in the meal. To everyone's surprised delight, all of the approximately 180 people who came were able to eat to their satisfaction. This was deemed to be a miracle.

Waqif of Al-Masjid an-Nabawi: The land of Al-Masjid an-Nabawi belonged to two young orphans, Sahal and Suhayl, and when they came to know that Muhammad wished to acquire their land for the purposes of erecting a mosque, they went to Muhammad and offered the land to him as gift; Muhammad insisted on fixing and paying a price for the land precisely because they were orphaned children. The ultimately agreed purchase price was paid by Abu Ayyub al-Ansari who thus became the واقِف (waqif, or creator of an endowment or mortmain; donor) of Al-Masjid an-Nabawi on behalf of, or in favor of, Muhammad.

He was chosen as the Rashidun governor of Medina, specially in the caliphate of Ali ibn Abi Talib.

Following the Muslim conquest of Egypt, Abu Ayyub moved to Fustat, where he lived in a house adjacent to the mosque of Amr bin Al'aas that had been completed in 642. Several other notable companions were his neighbors, including Zubayr ibn al-Awwam, Ubaida, Abu Dhar, Abdullah ibn Umar and Abdullah ibn Amr bin Al'aas.

He also led a distinguished military career, regarding which it was said, "He did not stay away from any battle in which the Muslims engaged from the time of Muhammad to the time of Muawiyah I, unless he was at the same time, engaged in another battle being fought elsewhere."

In a hadith in Qital al-Rome, a chapter of Sahih Muslim, Muhammad prophesied that the first army to conquer Constantinople will enter Paradise.

Muhammad ibn Jarir al-Tabari records a number of raids against the Byzantine Empire under the period A.H. 49 (9/2/669 - 28/1/670). Though Abu Ayyub was by then an old man, that did not deter him from enlisting. Shortly after engaging in battle, it is recorded that he fell ill and had to withdraw. The chief of army staff Yazid ibn Muawiya asked, "Do you need anything, Abu Ayyub?" To which Abu Ayyub replied, "Convey my salaams (Islamic greeting and farewell) to the Muslim armies and tell them, "Abu Ayyub urges you to penetrate deep into enemy territory, as far as you can go; and that you should carry him with you, and that you should bury me under your feet at the walls of Constantinople." At this, he died. Yazid ordered the Muslim army to fulfill his request, and they pushed back the enemy's forces until they reached the walls of Constantinople where Abu Ayyub was finally interred.

About this battle, Aslam ibn 'Imran narrates that when they were fighting the Byzantines, a Muslim soldier penetrated deep into enemy ranks. The people exclaimed, "Subhan Allah! He has contributed to his own destruction." Abu Ayyub al-Ansari stood up and answered, "O people! You give this interpretation to this verse, whereas it was revealed concerning us the Ansar. When Allah had actually given honor to Islam and its supporters had become many, some of us secretly said to one another, 'Our wealth has been depleted, and Allah has given honor to Islam and its supporters have become many, let us stay amidst our wealth and make up what has been depleted of it.' Thereupon, Allah revealed to Muhammad, 'And spend in the Path of God (فِي سَبِيلِ اللّهِ), and do not contribute to your own destruction / And spend in the way of Allah and do not throw [yourselves] with your [own] hands into destruction [by refraining].'," refuting what we had said. So, destruction lay in staying with our wealth and repleting it and abandoning combat.

“built of white marble by Mehmed II, the Conqueror, in 1459, adjacent to the türbeh of Abu Eyúb Ensari, the legendary standard-bearer of the prophet, whose tomb here was revealed in a vision a few days after the conquest…”

Baedeker's The Mediterranean, seaports and sea routes: Handbook for Travellers, 1911 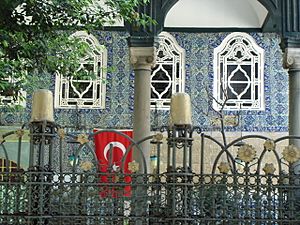 The türbe of Ayyub al-Ansari

After the Conquest of Constantinople by the Ottoman Turks, a tomb was constructed above Abu Ayyub's grave and a mosque built in his honor by Sultan Mehmed the Conqueror. From that point on, the area now known as the locality of Eyüp has become sacred and many Ottoman officials requested burial in proximity of Abu Ayyub. His tomb was discovered by the Ottoman saint Akşemseddin. The tomb was rebuilt by Sultan Mahmud II in 1882, This mosque was the traditional site for the coronation ceremony of the Ottoman Sultans, where each new Sultan was girded with the Sword of Osman, the founder of the Ottoman Empire, obeying the order of Sheikh Edebali, Osman I also went to the tomb of Abu Ayyub al-Ansari.

Some hadith narrated by Abu Ayyub

Abu Ayyub al-Ansari is credited with narrating many sayings of Muhammad. Well-known examples of these include:

All content from Kiddle encyclopedia articles (including the article images and facts) can be freely used under Attribution-ShareAlike license, unless stated otherwise. Cite this article:
Abu Ayyub al-Ansari Facts for Kids. Kiddle Encyclopedia.