Adelup Point is limestone promontory in Hagåtña, Guam that extends into the Philippine Sea and separates Asan Bay from Hagåtña Bay. It has been the site of the Ricardo J. Bordallo Governor's Complex since 1990. Adelup is therefore as a metonym for the Office of the Governor of Guam.

Adelup Point is composed of Mariana limestone, specifically Quaternary reef facies. Qtmr reef facies are "massive, generally compact, porous, and cavernous white limestone of reef origin, especially along cliff faces, made up mostly of corals in position of growth in matrix of encrusting calcareous algae." The coastline to the east and west comprises deposits of beach sand and gravel. 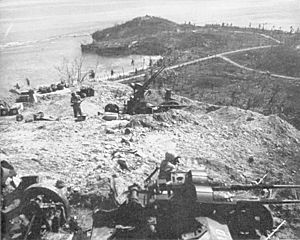 During the Japanese occupation of Guam from 1941 to 1944, Adelup Point was extensively fortified by the Imperial Japanese Navy, including with a battery of coastal guns. Adelup Point was the eastern edge of the Asan Invasion Beach used by U.S. forces as the northern invasion beach on July 21, 1944 that began the Liberation of Guam. The site of fierce fighting, the promontory was captured by the end of the invasion day. There are seven pillboxes, caves, and other Japanese defensive works identified on Adelup. One work was dug under the large concrete foundation of the Atkins-Kroll House. During the battle, it became an American command post.

In early 1945, the headquarters of the 5th Naval Construction Brigade under Commodore William O. Hiltabidle was located at Adelup. Later, a military officers' club was established at Adelup, apparently on the Atkins-Kroll building foundation. In 1978, War in the Pacific National Historical Park was established. The western shore and tip of Adelup Point fall within the Park. Adelup was once part of Asan-Maina before being annexed into Hagåtña so that Hagåtña remains the seat of the Government of Guam. In 1994, the Guam Museum, which had not had a permanent home since its previous building was destroyed during the American invasion, opened an exhibition hall at Adelup. It operated here until 2002, when it was damaged by Typhoon Chataan and Typhoon Pongsona, and forced to close. 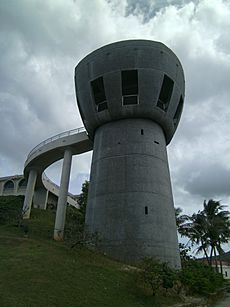 In March 2010, the 80 feet (24 m)-tall Latte of Freedom of opened at Adelup as a viewing platform over the adjacent waters. Though greatly changed from its original concept, it is meant to embody the strength of CHamoru culture with the shape of the latte stone. The Latte of Freedom is located next to the site of the old Guam Museum, which was converted into a Hall of Governors facility, commemorating the governors since the signing of the Guam Organic Act of 1950.

Besides the offices of the Governor and some government agencies, variously WWII-related fortifications, the Latte of Freedom, and the Hall of Governors, Adelup also contains:

All content from Kiddle encyclopedia articles (including the article images and facts) can be freely used under Attribution-ShareAlike license, unless stated otherwise. Cite this article:
Adelup Point Facts for Kids. Kiddle Encyclopedia.