Agaricus bisporus is an edible basidiomycete mushroom native to grasslands in Europe and North America. It has two color states while immature – white and brown – both of which have various names, with additional names for the mature state.

A. bisporus is cultivated in more than seventy countries and is one of the most commonly and widely consumed mushrooms in the world.

When marketed in its mature state, the mushroom is brown with a cap measuring 10–15 centimetres (4–6 inches). This form is commonly sold under the names portobello mushroom, portabella mushroom, and portobella mushroom, but the etymology is disputed.

The common mushroom has a complicated taxonomic history. It was first described by English botanist Mordecai Cubitt Cooke in his 1871 Handbook of British Fungi, as a variety (var. hortensis) of Agaricus campestris. Danish mycologist Jakob Emanuel Lange later reviewed a cultivar specimen, and dubbed it Psalliota hortensis var. bispora in 1926. In 1938, it was promoted to species status and renamed Psalliota bispora. Emil Imbach (1897–1970) imparted the current scientific name of the species, Agaricus bisporus, after the genus Psalliota was renamed to Agaricus in 1946. The specific epithet bispora distinguishes the two-spored basidia from four-spored varieties.

The pileus or cap of the original wild species is a pale grey-brown in color, with broad, flat scales on a paler background and fading toward the margins. It is first hemispherical in shape before flattening out with maturity, and 5–10 centimetres (2–4 inches) in diameter. The narrow, crowded gills are free and initially, pink, then red-brown and finally a dark brown with a whitish edge from the cheilocystidia. The cylindrical stipe is up to 6 cm (2 1⁄2 in) tall by 1–2 cm (1⁄2–3⁄4 in) wide and bears a thick and narrow ring, which may be streaked on the upper side. The firm flesh is white, although stains a pale pinkish-red on bruising. The spore print is dark brown. The spores are oval to round and measure approximately 4.5–5.5 μm × 5–7.5 μm, and the basidia usually two-spored, although two-tetrasporic varieties have been described from the Mojave Desert and the Mediterranean, with predominantly heterothallic and homothallic lifestyles, respectively.

This mushroom is commonly found worldwide in fields and grassy areas following rain, from late spring through to autumn, especially in association with manure. In many parts of the world it is widely collected and eaten; however, resemblance to deadly or poisonous lookalikes (see below) should be noted.

The common mushroom could be confused with young specimens of the deadly poisonous destroying angel (Amanita sp.), but the latter may be distinguished by their volva or cup at the base of the mushroom and pure white gills (as opposed to pinkish or brown of A. bisporus). Thus it is always important to clear away debris and examine the base of such similar mushrooms, as well as cutting open young specimens to check the gills. Furthermore, the destroying angel grows in mossy woods and lives symbiotically with spruce.

A more common and less dangerous mistake is to confuse A. bisporus with Agaricus xanthodermus, an inedible mushroom found worldwide in grassy areas. A. xanthodermus has an odor reminiscent of phenol; its flesh turns yellow when bruised. This fungus causes nausea and vomiting in some people.

The poisonous European species Entoloma sinuatum has a passing resemblance as well, but has yellowish gills, turning pink, and it lacks a ring. 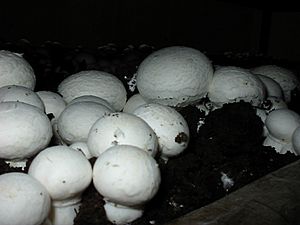 A. bisporus being cultivated

The earliest scientific description of the commercial cultivation of A. bisporus was made by French botanist Joseph Pitton de Tournefort in 1707. French agriculturist Olivier de Serres noted that transplanting mushroom mycelia would lead to the propagation of more mushrooms.

Originally, cultivation was unreliable as mushroom growers would watch for good flushes of mushrooms in fields before digging up the mycelium and replanting them in beds of composted manure or inoculating 'bricks' of compressed litter, loam, and manure. Spawn collected this way contained pathogens and crops commonly would be infected or not grow at all. In 1893, sterilized, or pure culture, spawn was discovered and produced by the Pasteur Institute in Paris, for cultivation on composted horse manure.

Modern commercial varieties of the common agaricus mushroom originally were light brown in color. The white mushroom was discovered in 1925 growing among a bed of brown mushrooms at the Keystone Mushroom Farm in Coatesville, Pennsylvania. Louis Ferdinand Lambert, the farm's owner and a mycologist by training, brought the white mushroom back to his laboratory. As with the reception of white bread, it was seen as a more attractive food item and became grown and distributed. Similar to the commercial development history of the navel orange and Red Delicious apple, cultures were grown from the mutant individuals, and most of the cream-colored store mushrooms marketed today are products of this 1925 chance natural mutation.

A. bisporus is now cultivated in at least seventy countries throughout the world.

In the U.S., the white button form of A. bisporus alone accounts for about 90% of mushrooms sold.

In a 100-gram serving, raw white mushrooms provide 93 kilojoules (22 kilocalories) of food energy and are an excellent source (> 19% of the Daily Value, DV) of the B vitamins, riboflavin, niacin, and pantothenic acid (table). Fresh mushrooms are also a good source (10–19% DV) of the dietary mineral phosphorus (table).

While fresh A. bisporus only contains 0.2 micrograms (8 IU) of vitamin D as ergocalciferol (vitamin D2), the ergocalciferol content increases substantially after exposure to UV light.

Some mushrooms contain hydrazine derivatives, including agaritine and gyromitrin, that have been evaluated for carcinogenic activity. Agaritine, a hydrazine, poses no toxicological risk to humans when mushrooms are consumed in typical amounts.

All content from Kiddle encyclopedia articles (including the article images and facts) can be freely used under Attribution-ShareAlike license, unless stated otherwise. Cite this article:
Agaricus bisporus Facts for Kids. Kiddle Encyclopedia.