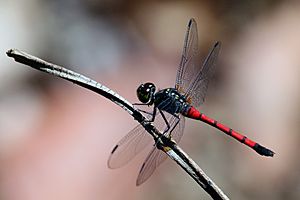 Agrionoptera insignis is a species of dragonfly in the family Libellulidae. It is native to much of eastern Asia and Oceania, occurring as far north as Japan and as far south as Australia. It is common in most of its range. The circumscription of the species is not entirely clear, so if the species is rediscribed, its status may change. Common names include grenadier.

The male of this species is generally 37 to 41 millimeters long, the hindwing about 28 to 30 millimeters long. The thorax is metallic green with yellow mottling. The eyes are brown and yellow. The abdomen is mostly red with a black tip. The abdomen of the female is duller in color.

This species lives in swampy areas, including disturbed habitat.

There are several subspecies, not all of which are thought to be valid taxa.

All content from Kiddle encyclopedia articles (including the article images and facts) can be freely used under Attribution-ShareAlike license, unless stated otherwise. Cite this article:
Agrionoptera insignis Facts for Kids. Kiddle Encyclopedia.