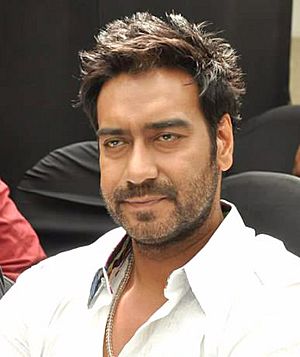 Ajay Devgan was born in Amritsar, India on April 2, 1969. He started his career in 1992 film Phool Aur Kaante. He is a Punjabi and completed his graduation in Mumbai, India. He is married to Kajol and has two children.

All content from Kiddle encyclopedia articles (including the article images and facts) can be freely used under Attribution-ShareAlike license, unless stated otherwise. Cite this article:
Ajay Devgan Facts for Kids. Kiddle Encyclopedia.