Albert Lea is a city in Freeborn County, in southern Minnesota. It is the county seat. Its population was 18,016 at the 2010 census.

The city is at the junction of Interstates 35 and 90, about 90 miles (140 km) south of the Twin Cities. It is on the shores of Fountain Lake, Pickerel Lake, Albert Lea Lake, Goose Lake, School Lake, and Lake Chapeau. Fountain Lake and Albert Lea Lake are part of the Shell Rock River flowage.

The city's early growth was based on agriculture, farming support services and manufacturing, and it was a significant rail center. At one time it was the site of Cargill's headquarters. Other manufacturing included Edwards Manufacturing (barn equipment), Scotsman Ice Machines, Streater Store fixtures, and Universal Milking Machines. As in many U.S. cities, Albert Lea's manufacturing base has substantially diminished. A major employer was the Wilson & Company meatpacking plant, later known as Farmstead and Farmland. This facility was destroyed by fire in July 2001.

The city is named after Albert Miller Lea, a topographer with the United States Dragoons, who surveyed southern Minnesota and northern Iowa in 1835, including the current site of Albert Lea. Captain Nathan Boone, a son of Daniel Boone, was the scout for Lea's unit.

Albert Lea received national attention in 1959 after Local 6 of the United Packinghouse Workers of America went on strike against Wilson & Co. (one of the Big Four meatpacking plants at the time) over issues involving mandatory overtime requirements. When Wilson & Co. attempted to operate the plant with replacement workers, violence erupted and split the town. During the 109-day strike, Governor Orville Freeman acted to quell the violence by closing the plant, calling in the Minnesota National Guard, and (on December 11) declaring martial law. A Federal district court in Minneapolis ruled against the Governor on December 23, and the plant turned back to Wilson & Co. just days later.

Albert Lea has a warm-summer subtype of the humid continental climate with cold winters to hot summers, with significant contrasts between seasons. Its climate type is typical for inland northern United States locations, but due to its southern position in the state, its summers and winters have higher temperatures than Minneapolis - St. Paul and Duluth.

State park of Minnesota located near Albert Lea, MN. Home to trails that take visitors around wet lowlands, oak savanna, and grasslands. Albert Lea Lake and park marshes draw hundreds of waterfowl during migration. Oak savanna and prairie landscape, including wetlands, dominate most of the park. One of the more distinctive aspects of the park is the 116-acre Big Island, covered with maple/basswood forest. Another is the glacial esker located in the northeast section of the park. Blazing Star Trail bike trail takes you from Albert Lea, and right into the state park. It's open to Spring and Fall bird migrations, glacial esker, great marsh, bird watching, hiking, canoeing, and camping. 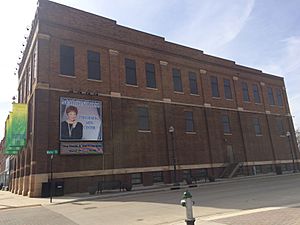 The Marion Ross Performing Arts Center is an historic building conveniently located in downtown Albert Lea. The theater has a spacious lobby and a fully equipped lighting and sound system. It seats 255. It has a projector that can be used with DVDs, VCRs and computers for a variety of presentations. The theater is an ideal facility for business meetings and seminars. A room on the downstairs level is perfect for small meetings.

Known as, "The Land Between the Lakes," there are three main lakes in Albert Lea: Fountain Lake, Albert Lea Lake, and Pickerel Lake. Fish typically found in these lakes include: bullhead, carp, northern pike, bass, walleye, catfish, yellow perch and various panfish. Boating, fishing, canoeing, and boat tours are can be found on these lakes.

Known as the six best days of summer and located in Albert Lea. It includes live entertainment, an antique tractor show, a draft horse show, a small and baby animal show, and a Sunday church service. It also has a beer garden, a cattle department, commercial exhibits, a conservation building, a creative arts and crafts building, fair food, a floral hall, a freeborn county 4-H building, a heritage barn, a course arena, a kiddie farm yard, a kid's zone, and machinery hill.

The Albert Lea Thunder was a junior hockey team that played at Albert Lea Ice Arena and was a member of the North American Hockey League. The team operated for two seasons in 2008-10 and folded due to financial difficulties. On May 11, 2010, it was reported that the team had found new owners and would relocate to Texas for the 2010–11 season. Their roster was officially sold to the expansion Amarillo, Texas franchise the Amarillo Bulls on May 26, 2010.

All content from Kiddle encyclopedia articles (including the article images and facts) can be freely used under Attribution-ShareAlike license, unless stated otherwise. Cite this article:
Albert Lea, Minnesota Facts for Kids. Kiddle Encyclopedia.