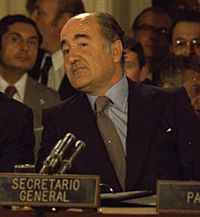 Alejandro Orfila (9 March 1925 – 9 June 2021) was an Argentine politician and winemaker. He was born in Mendoza, Argentina. He was the Secretary General of the Organization of American States from 1975 to 1984 replacing Galo Plaza, an Ecuadorian President.

He was an active figure in United States foreign policies dealing with South American. He was a key figure in the Panama Canal Treaty formation. He was present when President Jimmy Carter signed the treaty in 1977. He worked with Carter to fight human rights abuses in the continent.

When Ronald Reagan became president, his influence decreased with Reagan and U.S. Ambassador to the United Nations Jeane Kirkpatrick criticizing the Organization of American States.

In 1984, he was replaced with Brazilian diplomat João Clemente Baena Soares.

All content from Kiddle encyclopedia articles (including the article images and facts) can be freely used under Attribution-ShareAlike license, unless stated otherwise. Cite this article:
Alejandro Orfila Facts for Kids. Kiddle Encyclopedia.