Alessandra Amoroso ( born 12 August 1986 in Galatina, Province of Lecce) is an Italian pop/soul singer, songwriter, producer and TV personality. She was the winner of the 2009 edition of the Italian talent show Amici di Maria De Filippi. Since that all her eight albums peaked the Italian Albums Chart and she released successful singles and collaborations, including three number one hits, solding over 2.5 millions records in Italy.

She also acted in Io che amo solo te by Marco Ponti in 2015 and she co-host with Gianni Morandi the tv program Grazie a tutti in 2009.

Since her youth, Amoroso participated in numerous local competitions, obtaining good results. In June 2007 she participated in a contest, Fiori di Pesco, singing the song Amor mio, and placed first among the competitors, and was rewarded by Mogol. When she was seventeen, she participated in the auditions for Amici but she failed.

On 5 October 2008, Amoroso passed the audition for the eighth season of Amici di Maria De Filippi, singing the single from Alicia Keys, "If I Ain't Got You". Rudy Zerbi, the chairman of Sony Music Italy, assigned three unpublished singles to Amoroso. She participated in the recording of the compilation disc of the programme, Scialla. "Find a Way" reached the fourth place in the charts, while "Immobile" reached the top position. During the program, the singer distinguished herself thanks to her voice: all the teachers, especially Luca Jurman, recognized a sandblasted timbre. On 25 March 2009, Amoroso was proclaimed winner of Amici di Maria De Filippi, winning the first prize of 200,000 euros. On the same evening, she also received the critics' prize, a scholarship worth 50,000 euros. With this money, Amoroso says she will continue to study with voice teacher Luca Jurman. 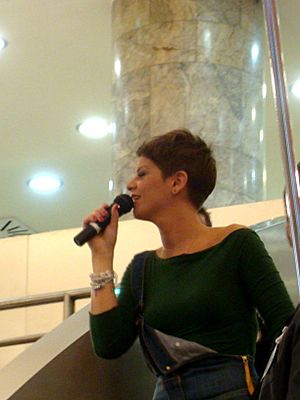 After presenting the song during the final of Amici di Maria De Filippi, Alessandra released her first single, Stupida on 27 March 2009. The song got a great success and reached the top position in the ranking of the Federation of the Italian Music Industry (FIMI). On 10 April 2009 Sony Music Italy produced her first EP, Stupida. The album became gold in reservation, because of thirty-five thousand copies being ordered. On 6 June 2009 in Verona Alessandra receives two Wind Music Award for the sales of Stupida and the compilation Scialla', both certified multiplatinum. From 3 to 8 May 2009 collaborated with the ADMO, an awareness campaign. The experience let her become on 29 December 2009 an official ADMO testimonial. The same day the singer is undergoing tests at the typing to be entered in the register of bone marrow donors. On 20 June 2009 Alexandra starts, after the zero date in Lecce on 12 April of that year, the Stupida Tour, a tour which goes on throughout the summer in different stadium and theatres in Italy, until 22 September 2009. In addition to the various stages of the main tour, Alessandra participates in several other tours, including Radio Norba Battiti Live and Trl On Tour, in addition to the tour organized by Amici di Maria de Filippi. On 21 June she performed at the concert "Amiche per l’abruzzo", organized by Laura Pausini, at the stadium of San Siro in Milan. From 19 June to 22 September, Amoroso pursued a summer tour to promote the Stupida EP on various stages throughout Italy. On 20 August Amoroso recorded, during the Stupida Tour, her sold-out concert at Arena Ciccio Franco in Reggio Calabria. As of 2010[update], Stupida has sold over 200,000 copies in Italy, thus obtaining double platinum.

On 12 September 2009 in Rome – during Reggaexplosion – Alessandra duet with Sud Sound System, an Italian band, thus realizing one of her dreams. On 3 October 2009 she participated in O' Scià, a song event organized by Claudio Baglioni. On 31 July 2009, during the Stupida Tour, Sony officially announced the release date of the first album by Alessandra Amoroso, scheduled for 25 September 2009. The title, announced in the following days, was Senza nuvole. Sony also published a version of the album with an extra DVD containing unreleased scenes of Alessandra in the recording studio and some of summer tour's stages. The album was anticipated by the single Estranei a partire da ieri, broadcast on radio from 28 August, with the exception of the RTL 102.5 which broadcast it from 24 August. On 8 October, presented for the first time the album at the Limelight, in Milan. Fans could watch the concert in 37 selected cinemas across Italy who broadcast the event live via satellite in high definition. The album reached the top position in the ranking of the Federation of the Italian Music Industry, wand held the position for four weeks. The second single extracted from the album was the title-track Senza nuvole, which was also the soundtrack to Love 14, a film by Federico Moccia. The videoclip of this song was awarded as Best 2009 video in Rome Clip Film Festival on 10 December 2009. From 8 to 29 November 2009, the singer conducted a variety, called Grazie a tutti, with Gianni Morandi. The collaboration with Gianni was not only about television: Alessandra, in fact, recorded a duet with him, contained in his album Canzoni da non perdere, titled Credo nell'amore. Since November 2009, Alexandra is promoting Aiutiamo Francesco, a charity initiative for a seven-year-old boy suffering from periventricular leukomalacia. On 18 November 2009, it was published an unofficial biography of Alessandra for Fanucci Editore, written by Angelo Gregoris and Alessandra Celentano, while in December 2009 Alessandra recorded, along with other artists, including J Ax and Marracash, a Christmas jingle for Radio Deejay, entitled Questo natale. From 21 January 2010 to 13 March 2010 Alessandra was busy with the winter tour, called Senza Nuvole Live Tour. On 22 January 2010 a new single was extracted by the album: Mi sei venuto a cercare tu. During the third and fourth bet of the Sanremo Festival in 2010, Alessandra crowd the stage at the Ariston Theatre just to sing with Valerio Scanu, the festival winner. On 2 April 2010 it was extracted the fourth and last single by the album: Arrivi tu, which became one of the hit of summer 2010. On 8 May 2010 Alessandra participated in TRL Awards 2010, because of the two nominations she received for the category MTV TRL First Lady and My Trl Best Video. Alessandra also participated in Wind Music Awards 2010, winning an award thank to the sales of Senza nuvole. From 4 July 2010 to 12 September 2010 Alessandra was busy with the summer tour, called Un'Estate Senza Nuvole Live Tour. The first album of Alessandra Amoroso sold 210,000 copies, and because of this was certified triple platinum.

On 15 July 2010 Sony Music Italy officially announced the second album of Alessandra Amoroso. The title, Il mondo in un secondo, was announced on the official forum of the singer on 29 August 2010. The album release date, 28 September 2010, was announced on 30 August on Sony's official website. The album was anticipated from the single La mia storia con te on 1 September 2010. Radio started broadcasting the single on 3 September 2010. The song was very successful, becoming one of the ten most-listened-to tracks in radio. It also reached the second position of the most downloaded singles chart drawn by FIMI. La mia storia con te was also chosen as the soundtrack for La figlia di Elisa 2, an Italian film.

Alessandra announced in late September 2011 that she was working about a new project of live about and she confirmed that it was ready just to the end of that year, in Dicembre. Comes out 4 November 2011 E' vero che vuoi restare, the single who anticipates the release of about a month the live album "Cinque passi in più" containing a cd with 5 new songs and a live cd with the concert that Alessandra kept in Milano on 22 December 2010 at Mediolanum Forum of Assago. A Deluxe Version of the album containing a DVD of the concert and backstage scenes, five postcards, photo of Alessandra and a 36-page-booklet is also available. On 20 January 2012 the second single from the album was published, titled Ti Aspetto. It's videoclip, filmed in London, was available on March, 14. In Italy the album sold more of 120,000 copies and it got the double platinum certification.

Alessandra Amoroso has repeatedly stated that her favorite kinds of music are the black, soul, R&B and gospel, which represent the sandblasted timbre of the singer. Luca Jurman, at the entrance of Alessandra in Amici di Maria De Filippi, saying "Alessandra is the new Anita Baker" associated her timbre to that of the renowned R&B singer.

All content from Kiddle encyclopedia articles (including the article images and facts) can be freely used under Attribution-ShareAlike license, unless stated otherwise. Cite this article:
Alessandra Amoroso Facts for Kids. Kiddle Encyclopedia.