Alexandra Bridge Provincial Park is a provincial park located in the Fraser Canyon of British Columbia, Canada. It was established on March 26, 1984 to preserve a historically significant suspension bridge spanning the Fraser River.

The Nlaka'pamux and First Nations have inhabited the area for over 9,500 years. The first persons of European descent known to have visited the site were Simon Fraser and his crew during their expedition down the Fraser Canyon in 1808. Situated at a narrows in the canyon, with room for the necessary abutments, the site was an important fishing site for the and Nlaka'pamux First Nations peoples. Like all such locations in the Fraser Canyon (which are many), there was a large aboriginal village on the west bank just downstream from the bridge site in pre-railway times. Fish-drying racks can still be seen at the location today, and were visible in historic photographs from early times.

A difficult and costly trail, intended to link Fort Langley with New Caledonia because of the loss of the old route in the wake of the Oregon Treaty of 1846, began on the east bank of the river and switchbacked up the mountainside, with "staircases" made for the mules and other pack animals. Dangerous and beset with difficult snows, the trail was abandoned after only a few uses and superseded by trails connecting inland farther south. There is mention of a pole-bridge built by aboriginal people at the site, torn down to make way for the "new" one of the 1860s, but a ferry also operated in this area connecting with Kequaloose on the east bank, where the Brigade Trail begins its climb over the Cascade Mountains before descending back to the Fraser via the Anderson River at Boston Bar. During the Fraser Canyon Gold Rush in 1858, a ferry service was established here in a monopoly situation, as J.W. Hicks, the magistrate at Yale, had his "fingers in the pie," as with many other businesses under his official purview. (Hicks was fired because of his various indiscretions during the affair known as McGowan's War.) 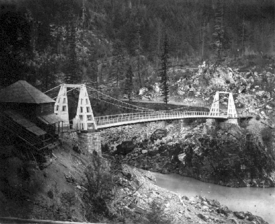 The original Alexandra Bridge of the Cariboo Road, built 1863 under contractor Joseph Trutch, pictured here in 1868 and looking to the east bank. Note the toll-house at left.

The original road bridge was constructed in 1861 by Joseph Trutch, Commissioner of Public Works for the Colony of British Columbia, as part of the development of the Cariboo Road using aboriginal and Chinese labour (though a government minister, Trutch contracted the job privately to his own profit and had the toll license at the location as part of his remuneration). He named the bridge after Princess Alexandra of Wales (wife of Queen Victoria's eldest son, who would become Edward VII). Trutch's bridge was rebuilt by the Royal Engineers as construction of the Cariboo Road progressed, with the newer span opening in 1863.

Just above the bridge on the east bank is Alexandra Lodge, on the site of one of the more important roadhouses of the many on the Cariboo Road, situated at the base of the arduous climb up the next hill northwards and at the end of the torturous journey connected Yale to Spuzzum. Also nearby is the Alexandra Tunnel, one of many on the route of the Canadian National Railway through the Fraser Canyon.

The original bridge was destroyed by the rising waters of the Fraser Flood of 1894 and its remains dismantled in 1912 due to hazards during railway construction, and the long abandonment of the Cariboo Road, itself a casualty of CPR construction in the 1880s. 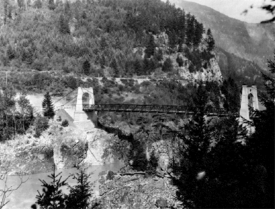 The bridge built in 1926 for the newly built Cariboo Highway, looking to the west bank.

After World War I, the dawn of the automotive era saw a reinvestment in roads in the province including the re-opening of the Fraser Canyon to road traffic in the form of the new Cariboo Highway in the 1920s, and a new suspension bridge was built upon the footings of the original structure in 1926 (with a deck level ten feet higher than the previous design). This second Alexandra Suspension Bridge still exists today, though it ceased to be used for automobile traffic in 1964. The new Alexandra Bridge, constructed by the B.C. Ministry of Highways in 1960-64, is approximately two kilometres (one mile) downstream and uses a high truss-arch span to cross the canyon.

The small 55 ha (136 acre) park is centred on the site of the original Cariboo Wagon Road bridge over the Fraser River. In addition, the site contains two well-defined glacio-fluvial benches that rise steeply on the east bank of the Fraser River.

The site of the bridge, like most similar spots along the Fraser Canyon, is a traditional fishing spot because of the way the river is forced through narrow, steep banks, offering fishermen a chance to reach salmon struggling through the stronger current through the narrowed gorge. Millions of Spring, Coho, Chum, Pink and Sockeye salmon pass through the park on their way to spawning grounds every year. As well, the park contains many large tree species such as Western hemlock, Western redcedar and Douglas-fir.

The park features a small picnic area with pit toilets and a wheelchair accessible trail leading to and beyond the bridge from the Trans-Canada Highway.

All content from Kiddle encyclopedia articles (including the article images and facts) can be freely used under Attribution-ShareAlike license, unless stated otherwise. Cite this article:
Alexandra Bridge Provincial Park Facts for Kids. Kiddle Encyclopedia.