Alexei Anatolievich Navalny (born 4 June 1976) is a Russian lawyer, politician, and activist. He is a known critic of President Vladimir Putin.

Navalny was born in Butyn to a Ukrainian father and Russian mother. In 1993 he started his law degree at Peoples’ Friendship University, in Moscow. In 1998 he graduated. In 2000, Navalny joined the Russian United Democratic Party, "Yabloko". 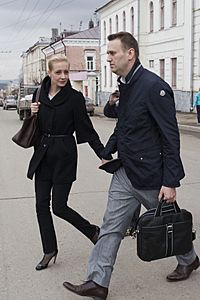 Navalny and his wife Yulia

He became known through his LiveJournal blog. In 2012, The Wall Street Journal described him as "the man Vladimir Putin fears most." In September 2013 Navalny came second in the Moscow mayoral election. Navalny is a Russian Opposition Coordination Council member. He is a Yale World Fellow. 60 minutes called Navalny ‘’the man trying to beat Putin’ in a program aired in December 2017.

He was a candidate for President of Russia in the 2018 election. He ran against President Vladimir Putin.

Navalny lives in Moscow with his wife and two children.

On 20 August 2020, Navalny was poisoned during a flight from Tomsk, Siberia to Moscow and was hospitalized in Omsk. He was soon in a coma, on a ventilator. On 7 September 2020, he woke up from the coma, and on 14 September, he was taken off the ventilator. He was released on 22 September.

On 17 January 2021, he went back to Russia, where he was arrested for going against terms of a suspended jail sentence.

All content from Kiddle encyclopedia articles (including the article images and facts) can be freely used under Attribution-ShareAlike license, unless stated otherwise. Cite this article:
Alexei Navalny Facts for Kids. Kiddle Encyclopedia.